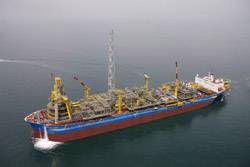 Pictured is the Espirito Santo Floating Production, Storage and Offloading (FPSO) vessel, the type of vessel that will soon be working offshore in the Gulf of Mexico. (Photo courtesy Shell)

The Bureau of Ocean Energy Management, Regulation and Enforcement (BOEMRE) today provided the final approval necessary for Petrobras America, Inc. to begin oil and natural gas production at its Chinook-Cascade project using a Floating Production Storage Offloading (FPSO) facility. This will be the first time this technology is used in the U.S. Gulf of Mexico. BOEMRE approved the project’s Production Safety System permit and Supplemental Deepwater Operating Plan (DWOP), to ensure that stringent safety regulations were met. The FPSO has a production capacity of 80,000 barrels of oil per day and 16 million cubic feet of natural gas per day. With the completion of this final regulatory step, production from this facility is expected to begin in the near future.

The Cascade-Chinook oil and natural gas project, located in the Walker Ridge area of the Gulf, approximately 165 miles offshore Louisiana in 8,200 feet of water, will use an FPSO, the B.W. Pioneer, which is a floating facility that has the capability to process oil and natural gas, store the crude oil in tanks located in the facility’s hull, and offload the crude to shuttle tankers for transportation to shore. Natural gas processed by the facility will be transported to shore by pipeline. Petrobras’ FPSO will be equipped with a disconnectable turret-buoy. In the event of a hurricane or tropical storm, the facility is designed to disconnect from the turret-buoy and move off location until the storm has passed.

“These regulatory approvals pave the way for safe, new production of oil and gas resources in the Gulf of Mexico,” said BOEMRE Director Michael R. Bromwich. “They reflect enormous and sustained effort by both BOEMRE and Petrobras personnel and represent the commitment shared by government and industry to the safe production of our country’s offshore energy resources.”

The Production Safety System permit approved today includes details of the production process that will be utilized, with specific description of the safety systems associated with the flow of oil and gas from the subsea wells to the process equipment onboard the FPSO. The approval process included an engineering analysis of the safety systems, as well as multiple pre-production inspections of the actual FPSO facility by BOEMRE personnel. The requirements for approval of a Production Safety System are covered in the Code of Federal Regulations, 30CFR250.800 – 808.

A DWOP includes the specific details and capabilities of the FPSO facility and associated new technologies. The initial DWOP for this project was approved in August 2009. Subsequently, Petrobras submitted a Supplemental DWOP with information regarding adjustments to the mooring system, including alternative methods of monitoring the tensions of the mooring lines. BOEMRE engineering staff worked with Petrobras to ensure that safety requirements were met. The requirements for approval of a DWOP are covered in the Code of Federal Regulations, 30CFR250.286 – 295.

In preparation for this first use of an FPSO in the Gulf of Mexico, the then-Mineral Management Service and the U.S. Coast Guard worked to identify and clarify responsibilities in a Memorandum of Agreement (MOA) in February 2008. The MOA assigned responsibilities to each agency for regulating or approving specific systems associated with the floating facility. BOEMRE regulates oil and natural gas activities such as exploration, drilling, well completion, development, production, pipeline transportation, storage, well servicing and workover activities, while the U.S. Coast Guard regulates offshore facilities, mobile offshore drilling units and vessels engaged in oil and gas activities such as tank vessels and offshore supply vessels.