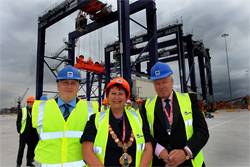 cut
The Finnish Ambassador for the UK recently visited PD Ports owned Teesport, to see the facility’s latest cranes, purchased from a Finnish manufacturer.
As part of his tour of north-east England and Edinburgh, Ambassador Pekka Huhtaniemi visited the port with his wife, Liisa Huhtaniemi, met with senior port officials and was taken on a tour of the dock estate and shown around the port on a launch boat.
Mr Huhtaniemi then viewed the four new RTG (rubber-tyred gantry) cranes delivered to Teesport on 18 August.
The Ambassador and his wife were joined by PD Ports’ CEO David Robinson, Olwyn Peters, Mayor of Redcar and Cleveland, and executives from port agency GAC World, shipping line Containerships and crane manufacturer Konecranes.
“Teesport is clearly a great logistics hub in north-east of England,” says Mr Huhtaniemi. “Konecranes has shown what Finland can deliver in terms of high-tech industry, as have the other Finnish firms with a presence at Teesport - Containerships and chemical storage firm Kemira.
“My port tour has also highlighted the important trade links between the UK and Finland and I have seen that north-east England is one place in the UK where Finnish and British trade is flourishing.”
The £5 million Konecranes RTGs, manufactured in Finland and Poland, are the first of their type to be supplied by the company in the UK and allow PD Ports to significantly improve handling capacity on the Teesport Container Terminal as volumes continue to grow.
The cranes are a key component of the current £16.7million expansion of the container terminals at Teesport and represent the biggest single equipment investment in the port since the container terminal opened in 2003.
Teesport’s container terminals saw volumes increase by 45% in 2010 and capacity is currently being expanded from 235,000 to 450,000 TEU (twenty foot equivalent unit, the standard measurement for sea containers).