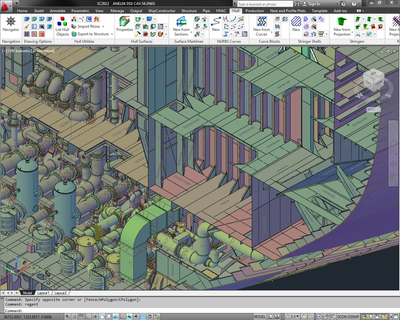 ERP systems are beasts. To be happy, they have to be well fed.

Computer Aided Design/Drafting (CAD) systems are a source of the food for Enterprise Resource Planning (ERP) systems since they contain significant information regarding the plans and materials needed to construct a ship. ERP systems are data hungry. They can only be effective at planning purchasing and production as long as the beast is consuming the information that the CAD system provides.

In fact, there is a direct link between the success of an ERP system and how well it is fed the information it requires to do its job. Unfortunately, too often the process of feeding ERP is handled via manual data entry which is time consuming, frustrating and prone to error. On the other hand, even with an automatic or semi-automatic method for transferring data, the transmission is often done poorly because the right data is not transferred in the right fashion in the right level of detail. Key considerations include how and if a specific piece of data should be translated for its new environment and what level of data should be transferred in order to ensure that sufficient data is available to the ERP system without introducing the unwanted complexity that can result from transferring too much data in an unstructured fashion.

Technology, in and of itself, is rarely a significant hurdle. Modern ERP systems have more than enough capability to integrate with CAD programs. In reality, the most important factor for successfully integrating CAD with ERP is having a clear, documented understanding of the business processes that the ERP system is intended to support. In other words, you have to know what the beast likes to eat and what it needs to keep it happy and healthy so it doesn’t come back and bite its owner.

With this understanding in mind, the US subsidiary of ShipConstructor Software Inc. (SSI) worked with six leading shipyards to create a repeatable process-focused approach for integrating its Autodesk based ShipConstructor CAD system with various ERP programs. The strategy involved analyzing all of the shipyards’ inputs and outputs and the information flows within their larger business processes.

1. Map the activities and information flow within each organization;
2. Map existing data elements across various systems to create a data alignment map;
3. Define a neutral schema that could be used to transfer data between CAD and ERP systems that supported the Data Alignment Map.

Let’s look at these steps in detail.

First, SSI had to map each shipyard’s business process at both a macro and micro level. The documentation had to be able to be understood by shipyard workers but also useful to those working with IT systems. SSI selected the IDEF0 function modeling methodology because it is equally well suited to both domains. It offers a functional modeling language for the analysis, development, reengineering, and integration of information systems, business processes, or software engineering analysis. An IDEF0 analysis also shows data flow, system control, and the functional flow of lifecycle processes.

SSI reviewed each shipyard taking into account all departments, existing IT systems, facilities, tools, and both automated and manual processes. To ensure that each of the required stakeholders was engaged in the process, SSI held several lunch-and learn sessions at each organization to highlight the project methodology and the value of the exercise to the organization. SSI made sure to include all key stakeholders in each of the process modeling sessions which allowed them to see a higher level view of their part in their company’s overall operations.

To use the beast metaphor again, SSI talked to numerous individuals at each company to understand exactly what information the ERP beast consumed and how it consumed it. This was necessary from a technical perspective but there were other benefits as well. By including people at various levels in each organization it increased their sense of ownership in the project and was a key reason for the project’s success. An additional benefit of documenting processes so thoroughly was that as SSI helped walk people through each step of the IDEF0 model, redundancies and shortcomings of their business processes became apparent. With all the key stakeholders inside the room, SSI was able to help the companies create “To-BE” process changes to streamline and improve their organizations.

The next step was creating a data alignment map aligning the specific data fields that existed in ShipConstructor’s manufacturing bill of materials (mBOM) and those in each of the ERP systems. The mapping was discovered naturally during the IDEF0 process mapping through the identification of inputs, outputs, controls and mechanisms for each activity. By considering the alignment map generated from multiple shipyards using the same ERP systems, SSI was also able to create a consolidated best-practice map for each ERP system.

An important factor to note was that SSI deliberately did not align certain data fields even if there was a match in both the CAD and ERP systems. Doing so is a mistake typically made in failed integration projects. SSI realized that it was important to only align the data that was necessary to be shared, as defined by the IDEF0 process documentation.

After the data alignment maps had been created, SSI had to create a single neutral data exchange format that allowed integration with multiple different ERP systems and allowed flexibility for changes in the future. In order to allow the same toolset to be utilized by each of the participating shipyards, it was determined that a neutral format schema would be required. This was to allow the various ERP systems in use to capture the data and to ensure that the same data set would satisfy the data alignment map for each yard.

SSI submitted to the yards a specification following best practices for the storage and classification of data. The document format leveraged existing standards based descriptions of complex textual data, eXtensible Markup Language (XML), and its associated schema definitions (XML Schema).

It was noted that a neutral data exchange format was superior to a proprietary data transfer method in that it allowed for greater interoperability with other legacy systems. The schema rules also provided the flexibility for shipyards to extend the data format to suit future requirements since it provided a means to define custom data objects and information logically within the framework of the data exchange format. As these shipyards are of varying size, complexity, and capability, and utilize a variety of ERP systems, the resulting schema is believed to be representative of the shipbuilding industry as a whole.

The final stage of the project was for SSI to develop a few simple tools within the ShipConstructor environment that would generate XML according to the schema developed earlier. As ShipConstructor drawings are automatically generated from the 3D model in DWG form and driven by the Build Strategy for the project, it made sense to drive XML generation from within a ShipConstructor production drawing. Another reason to create the tools within ShipConstructor itself is that the timing for the generation of the XML is logically tied to the creation or approval of a new revision of a given drawing and this is an activity driven from within the drawing for these clients. For this reason, SSI created a set of commands that can be run inside the ShipConstructor/AutoCAD environment.

In other words, SSI modified ShipConstructor software so that with a few mouse clicks inside of a production drawing, the metaphorical food for ERP is cooked and served on a platter, ready for the beast to consume.

1. A reduction in scheduling delays due to a tighter integration between material planning and engineering work packages.
2. Increased throughput due to improved Just In Time material handling
3. Business improvements identified via the process mapping exercise

The philosophy that SSI has followed in utilizing the IDEF0 methodology for documenting business’s processes and then creating a proper data alignment map and a neutral exchange format can be applied to various other integration projects including the integration of PLM systems and other applications used by shipbuilders.

ERP systems may be a beast but SSI has found a way to keep the beasts happy. The key is feeding them well.

Patrick Dean Roberts is Director of Operations at ShipConstructor Software USA, Inc., in charge of al US-based sales, support, training, consulting, custom integration and development, and various research and development projects focused on the US market. Roberts served a two year term as the Vice Chairman of Ship Production Process Technologies in the United States National Shipbuilding Research Program (NSRP) that is governed by 12 Executive Members of a consortium elected shipyard organization and is currently serving in his second two year term as the NSRP Vice Chairman of the Business Process Technologies Panel. He has ten years of US shipbuilding, repair, and retrofit experience in the areas of engineering, planning, project management, and research and development, as well as 4 years as an executive manager with ShipConstructor Software USA, Inc.

(taken from the 4Q edition of Maritime Professional magazine)