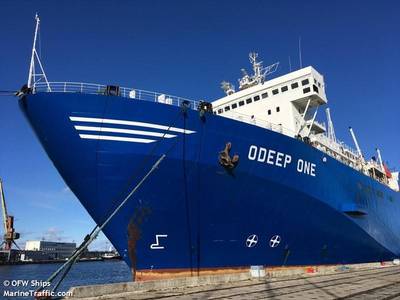 Owners of a factory ship moored off southern France which normally turns seawater into bottled mineral water have converted it to make sanitizing solution in the fight against the coronavirus.

At the start of the year, the 179-meter long Odeep One began making bottled water pumped from the depths of the Mediterranean but since April 1 the plastic bottles which roll off its production line have contained alcohol solution instead.

The French owners of the Panama-flagged ship currently produce just over 43,000 of the 600 milliliter bottles a day but they soon hope to more than double capacity to over 750,000 bottles a week, according to technical director of the parent company OFW Ships, Charles Denise.

"Sailors are used to helping with rescue operations, it's in their DNA. And sailors are flexible," he told Reuters TV on board the ship this week.

Before the coronavirus crisis, the ship, built in East Germany as a train ferry but now moored in Sete, conducted regular five-day voyages in the Mediterranean to draw up water from a depth of 300 meters, filtering it and bottling it on board.

The company has put in place safety measures including ventilation and extractors in the factory and a ban on electronic equipment, and drums of flammable ethanol are stored at a distance at the back of the ship.

The company says it will continue to produce the sanitizer solution as long as it is needed.