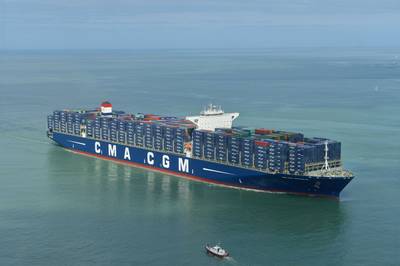 French-based CMA CGM, the world's third-largest container shipping firm, said on Monday it expects its volume growth to outperform the market again in 2016 after strong expansion last year helped it cushion a slide in freight rates.

CMA CGM, which is in the process of acquiring Singapore's Neptune Orient Lines (NOL) for $2.4 billion in its biggest-ever deal, has been pursuing economies of scale to ride out a shipping downturn linked to vessel oversupply and faltering economic growth.
The Baltic Exchange's main sea freight index has set a series of all-time lows in recent months, before rebounding sharply since February.
CMA CGM's full-year sales were $15.7 billion, down 6.4 percent from 2014, as a 6.3 percent increase in transported volumes was outweighed by the steep fall in freight rates, it said in a statement.
Market estimates have put global growth in container volumes last year at around 1-2 percent.
The group reported lower operating and net profits but said lower fuel prices and efficiency measures, which reduced its unit costs, helped keep results close to 2014 levels.
Core operating profit was down 6.4 percent at 911 million euros, leaving its operating margin unchanged at 5.8 percent, while group net profit was down 2.9 percent at 567 million euros.
CMA CGM said its volume growth last year was supported by the launch of a vessel-sharing alliance with China Shipping Group and United Arab Shipping Co, as well as expansion on U.S. routes that allowed it to benefit from an accelerating economy in the United States.
Trade between Asia and the United States has become a focus for CMA CGM. Its takeover of NOL, which will bring it closer to larger rivals Maersk Line and MSC, will make it the market leader on trans-Pacific routes.