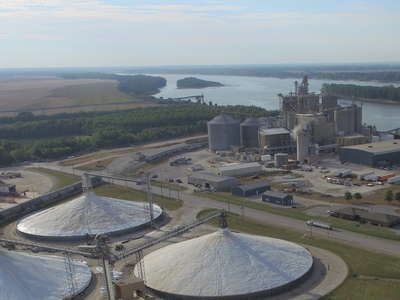 The Consolidated Grain and Barge Co. (CGB)  announced the completion of its $32 million expansion at its soybean processing facility at the Port of Indiana-Mount Vernon.

CGB originates and markets grain and oilseeds for domestic and international markets. Just one bushel of soybeans can produce 11 pounds of soy oil, which is commonly used for cooking, biodiesel and other industrial applications, and nearly 49 pounds of soymeal and soy hulls, which serve feed mills, poultry manufacturers and hog farmers.

Soybeans are a primary field crop in the United States, and Indiana ranks third in the country for soybean production.

Business activities at the Port of Indiana-Mount Vernon support over 7,000 jobs and generate more than $1 billion in annual economic impact for the state, including $348 million in wages and $33 million in state and local taxes each year. Coal, soybean meal, soybean oil, ethanol, dried distillers grain, corn, wheat, fertilizer, minerals and cement are primary cargoes moving through the Mount Vernon port, which has achieved record-setting shipments for the past four years.

CGB is headquartered just outside New Orleans and is jointly owned by two Japanese organizations - Itochu Corporation and ZEN-NOH, a federation of agricultural cooperatives. The Posey County plant is the company's only soybean processing facility and its strategic location allows for multiple logistics options, including inbound and outbound barge, rail and truck transportation as well as outbound container shipping options. Roughly 60 percent of the facility's volume is shipped via barge, utilizing the Port of Indiana-Mount Vernon.