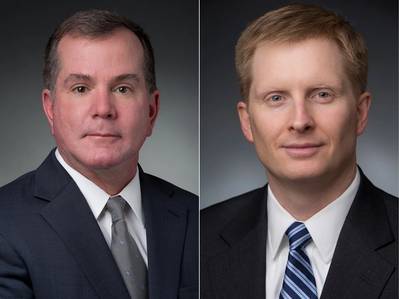 Huntington Ingalls Industries announces two executive changes to its government relations team
Huntington Ingalls Industries (HII) announced that William Ebbs has taken on the new role of vice president, federal policy, and Andrew Hicks has been promoted to vice president, legislative affairs. Both will report to Mitchell B. Waldman, corporate vice president, government and customer relations.
"Will and Andrew have been important members of our legislative team and have tremendous experience working with Congress and the executive branch of the government," Waldman said. "Having Will and Andrew in their new roles enables us to better leverage their vast experience and considerable talent to help create value and to strengthen our relationships with many of our key stakeholders who are important to our success. I look forward to continuing to work with them as we continue to expand our business base."
Ebbs joined HII in 2011 and currently serves as corporate vice president, House legislative affairs. In his new role, he will be responsible for liaising with various executive branch organizations and commercial trade and manufacturing associations to help shape acquisition and business policy supporting HII interests. Due to his significant experience in defense budget and appropriations activities, he will also serve as the liaison between HII and the Office of Management and Budget, as well as the Department of Defense and Department of Energy policy and legislative affairs offices.
Ebbs is a former submarine officer and a 31-year veteran of the U.S. Navy. He earned a bachelor's degree in electrical engineering from Auburn University and a master's degree in national resource strategy from the National Defense University, with emphasis on the global shipbuilding industrial base.
Hicks has served as HII's director, legislative affairs, since 2011. In his new role, he will be responsible for the development of lobbying strategy and implementation of lobbying activity, with a general focus on House of Representative members, staff and committees of jurisdiction. He also will be responsible for ensuring compliance with all Federal Election Commission and all other legal and regulatory disclosure requirements regarding lobbying activity. Other duties include the shaping of legislative proposals and special authorities.
Prior to joining HII, Hicks was a director of legislative affairs with Northrop Grumman. He also served on the staffs of Reps. Terry Everett (Ala.-2), Tom Feeney (Fla.-24) and the late Jo Ann Davis (Va.-1). He was commissioned through the Naval ROTC unit at Vanderbilt University and served four years in the Navy. He earned a bachelor's degree in political science from Vanderbilt and a master's degree from George Washington University's Graduate School of Political Management.
• Northrop Grumman • Huntington Ingalls Industries • Congress