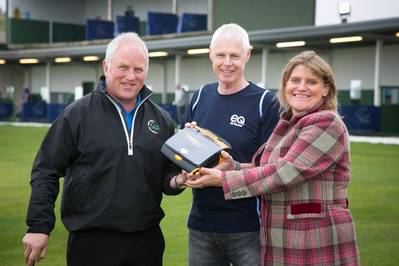 Fifteen golf clubs across Aberdeen City and Shire have been gifted life-saving equipment worth a total of more than $24,000 by leading North Sea oil producer, EnQuest, in partnership with safety training and offshore services specialist, Falck Safety Services.

Automated external defibrillators (AEDs) were donated to each of the clubs following EnQuest’s annual charity golf day in June which raised more than $120,000 for a number of charities, including the golfing legend Bernard Gallacher’s Play Golf – Help Save Lives campaign.

The former Ryder Cup captain, who started the campaign after suffering a cardiac arrest during a dinner reception in Aberdeen last year, credits the availability of an automated external defibrillator (AED) at the venue along with early-response CPR treatment he received for saving his life.

His campaign, which was established in partnership with the Professional Golfers’ Association and the Arrhythmia Alliance, is aimed at providing public-access defibrillators at golf clubs across the UK and Ireland to ensure that they have access to life-saving equipment in the event of a sudden cardiac arrest.

EnQuest also donated $16,000 to the Arrhythmia Alliance, which raises awareness of cardiac arrhythmias and their treatment, as well as $40,000 to each of the company’s two nominated charities - Archway and The Paul Lawrie Foundation.

Neil McCulloch, president, North Sea at EnQuest, said: “Thanks to the fantastic generosity of everyone who participated in our golf day, we are now in a position to be able to support the work of a number of fantastic charities.

“As a company that is focused on delivering safe results, we are proud to be getting defibrillators out to many of the golf clubs in the North East that have high levels of membership. Falck Safety Services are working with the clubs to provide training so that, in the terrible event someone suffers a cardiac arrest, not only do they have the right equipment, but they also have the right knowledge to save a life.”

Mr Gallacher said: “Without a defibrillator, your chance of surviving a cardiac arrest is as low as 5% so we are incredibly grateful to EnQuest for their generous donation of this life-saving equipment to so many clubs. Not only do events such as their golf day help raise awareness of how important early access to a defibrillator is, the donations have made a significant impact on our efforts to ensure every club and driving range in the UK and Ireland has at least one public access AED by the end of this year.”

Falck Safety Services also generously donated 10 AEDs to be auctioned off at the golf day, two of which were purchased by EnQuest and donated to Sir Robert McAlpine, the construction and civil engineering firm behind EnQuest’s new North Sea headquarters in Aberdeen’s city centre, and the company’s onshore supply base in Peterhead.

EnQuest’s 2014 charity golf day saw 150 players from more than 31 companies across the energy industry tee off at the world-famous Fairmont course in St Andrews.

Former Open champion Paul Lawrie, who set up the Paul Lawrie Foundation in 2001 to help give youngsters from all backgrounds across Aberdeen City and Shire the opportunity to play and compete in sport, said: "EnQuest’s golf day raised a phenomenal amount of money for us as well as Archway and Bernard's defib campaign.  This fantastic donation will help us with our goal of getting more kids involved in golf and sport in general. EnQuest’s commitment to the causes they choose is clear, and we are very pleased to have their support.”

Archway provides a lifeline of caring services for children and adults with learning disabilities and their families through Aberdeen and Aberdeenshire. EnQuest’s latest donation adds to the $190,000 already raised by the company since 2012 and which will go towards the charity’s appeal for Betty’s Place, a specially-adapted holiday cottage to be built in Aberdeen.