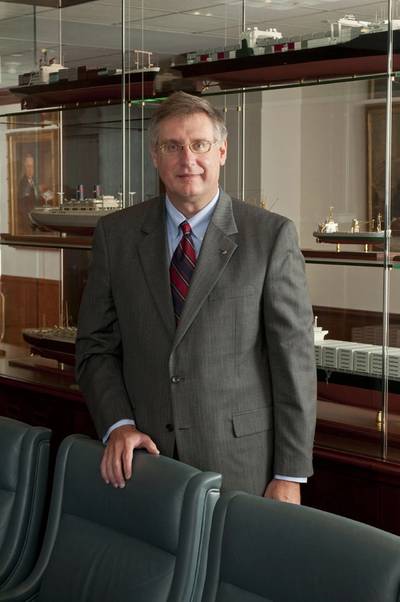 ABS has endowed the American Bureau of Shipping Professor of Marine and Offshore Design and Performance position at the University of Michigan, naming Dr. Steven Ceccio, Chair of the Naval Architecture and Marine Engineering Department, to the role.
Speaking at the University of Michigan on April 14, 2016, ABS Chairman, President and CEO Christopher J. Wiernicki talked about ABS’ longstanding commitment to education. “We believe that encouraging students in engineering is crucial to the future of the industry,” he said. “For decades, this school has educated and developed some of the brightest minds in naval architecture and marine engineering — leaders who are taking the marine and offshore industries to new technical heights. Not only are you shaping minds, but you also are on the cutting edge of research efforts that will drive the future of our industry.”
Wiernicki explained why Dr. Ceccio was selected for the endowed position, pointing to a proven track record in research that includes more than 70 research grants for organizations that include the Office of Naval Research, Navy Sea Systems Command, Department of Energy, General Electric, the Defense Advanced Research Projects Agency, Air Force Office of Scientific Research, the Sandia National Laboratory, and the American Bureau of Shipping. Wiernicki noted that Dr. Ceccio’s pursuits in academic research and scholarship not only earned him academic accolades, but led to his being awarded the prestigious Freeman Scholar Award from the American Society of Mechanical Engineers.
Wiernicki explained that Dr. Ceccio’s passion for education and research, his drive to develop a world-class naval architecture and marine engineering program, his commitment to academic excellence, and his dedication to research and academic excellence are some of the reasons for selecting him as the ABS Professor of Marine and Offshore Design and Performance.
ABS has established various scholarships and endowments at technical universities in China, Greece, Italy, Japan, Korea, the UK and the US and has supported additional educational initiatives, including research projects, at a number of leading international maritime universities.
• American Bureau • American Society of Mechanical Engineers • Christopher J. Wiernicki