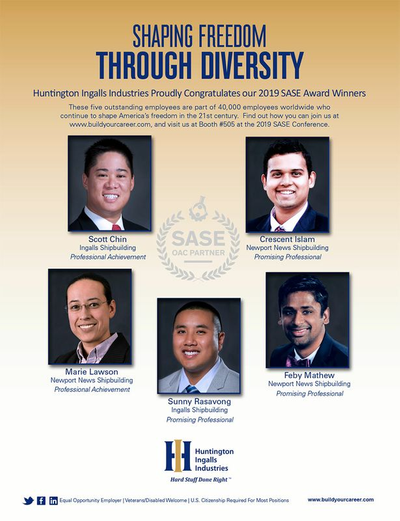 Huntington Ingalls Industries announced that employees from its Newport News Shipbuilding and Ingalls Shipbuilding divisions received awards during the 2019 Society of Asian Scientists and Engineers (SASE) National Conference and STEM Career Fair. The conference, the largest for Asian Americans in the United States, was held Oct. 10-12 at the David L. Lawrence Convention Center in Pittsburgh.

Marie Lawson, an engineer at Newport News, and Scott Chin, an engineer at Ingalls, received Professional Achievement awards. The award recognizes highly experienced, mid-career professionals who have made significant discoveries or important advances in their chosen career paths and are acknowledged as leaders of large initiatives.

SASE was founded in 2007 to help Asian heritage scientific and engineering professionals achieve their full potential. The society’s achievement awards recognize Asian and Pacific Islander American students and professionals for work they are doing in their respective fields.