Dryad: Asian Piracy on the Rise 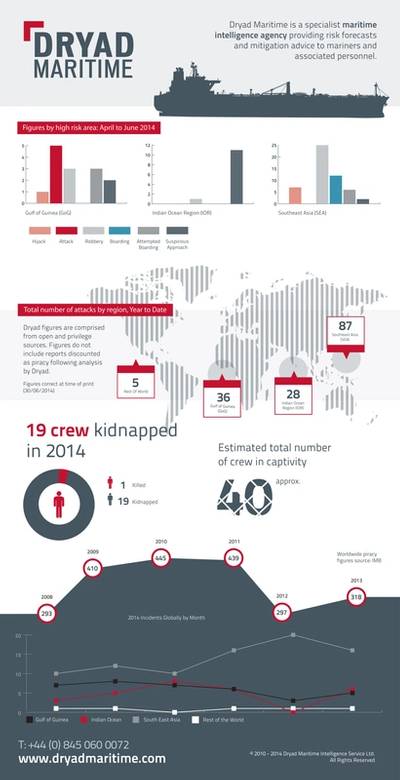 Dryad Maritime gives warning of increasing SE Asia piracy. The warning results from the release of their Q2 figures, containing data that shows the area experiences the highest number of maritime crime incidents in 2014 in comparison with other traditional piracy hot spots.

The warning comes in the wake of the most recent hijack of a tanker, (MT Moresby 9), off the Anambas Islands on July 4. Pirates boarded the vessel, taking the crew hostage before stealing part of the 2,200-metric-ton cargo of Marine Gas Oil (MGO). The vessel location is still unknown.

This year alone has 12 reported cases in which vessels were boarded underway in addition to 19 reports of robberies, attempted robberies or suspicious approaches in the anchorages east of the Singapore Strait. The MT Ai Maru is the fifth hijacked product tanker as of April 2014.

According to public policy think-tank, Nautilus Institute for Security and Sustainability (NISS), the rise of piracy in SE Asia is attributed to various causes which include: over-fishing, poor maritime regulation, organized crime syndicates, widespread poverty and politically motivated groups. In addition, the NISS says the rise in SE Asian trade waters furthers the incentive for pirates. From 2010 to 2011, overall trade in ASEAN increased by 16.8%. In particular, ASEAN exports of mineral fuels and oils and distilled products were worth $228 billion in 2011.

The increased threat occurs while Dryad Maritime begins to open new offices in the Asia Pacific region, providing better access of their expanding products and services to regional companies.

Ian Millen, Chief Operating Officer, Dryad Maritime stated, “Our team of analysts have assessed that at least one gang is operating to the east of Singapore, hijacking small product tankers and stealing fuel cargoes. These criminals have knowledge in the workings of ships’ equipment and procedures for carrying out STS transfers. Without more proactive efforts by local maritime forces to counter this crime, we predict further incidents of this type in the region”.

In addition, Dryad Maritime warns seafarers transiting the southern Philippines and adjacent coasts to maintain vigilance following the attack on the yacht, MY Catherine, during Q2.

Mike Edey, Head of Operations, Dryad Maritime, said, “Abu Sayyaf continues to operate with impunity. Although the majority of their activity centers on coastal terrorist attacks, the kidnap of a German couple from MY Catherine serves as a reminder of the need for caution. Whilst there is no evidence that Abu Sayyaf will start to target larger, commercial vessels in the region, as a politically motivated group the possibility to develop such a capability remains”.

Dryad’s warning, which comes as the Eastern Sabah Security Command (ESSCOM), is reported to have initiated routing measures for commercial vessels to help improve maritime security in the region.

The Horn of Africa section of Dryad’s offers better quarterly figures, where the company welcomes the release of the remaining 11 crew members from MV Albedo and praises those involved in the release of the seafarers and support of their families.  After almost four years in captivity and having seen other crew members released in 2012, the remaining crew endured extended misery that included the sinking of their ship, as well as the death and disappearance of other crew members.

Ian Millen, Chief Operating Officer of Dryad Maritime said, “The release of Albedo’s remaining crew has been great news, but it highlights the good, the bad and the tragic in the story of Somali piracy.  Good in that we have seen charities such as the Maritime Piracy Humanitarian Response Programme (MPHRP) work tirelessly with others to support the seafarers and their families; bad in that the owner of the vessel reportedly abandoned the crew resulting in a longer than necessary captivity and tragic in that approximately 40 seafarers remain in captivity. Seafarers who get precious little attention from the wider media or general public. We must not forget them.”