Dominican Republic Shuts Most Ports ahead of Hurricane Maria 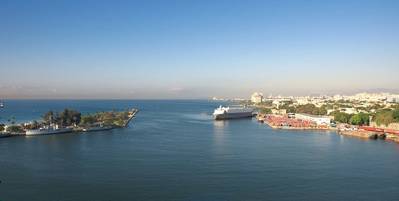 Dominican Republic closed most of its ports ahead of Hurricane Maria, but the country's 34,000-barrel-per-day refinery was still running, the government said on Wednesday.

Ports that suspended operations under the "red alert" declared for extreme weather conditions are La Romana, Samana, Arroyo Barril, Puerto Plata and Manzanillo, the Dominican Port Authority said in a statement. Maria was a Category 4 hurricane when it hit Puerto Rico earlier on Wednesday.
The ports of San Souci and Haina, which serve the country's sole refinery, also halted operations on Wednesday, according to operators of those facilities. The port of Caucedo has not declared its status.
State-run refining company Refidomsa last week lifted a force majeure declaration on its fuel deliveries due to Hurricane Harvey, which limited its imports of oil from the U.S. Gulf Coast to be processed at the facility.
The refinery's docks temporarily closed earlier in September due to Hurricane Irma, but they resumed operations days later.
Refidomsa, owned by the island's government and Venezuela's state-run oil firm Petróleos de Venezuela, S.A. (PDVSA) , this week issued a "yellow alert" to the industry ahead of Maria, which means it will monitor the storm to decide on further action, the Dominican firm said.
Puerto Rico's Yabucoa terminal operated by Buckeye Partners suspended operations on Tuesday. The company is monitoring the storm to decide whether to close its Bahamas terminal, the largest in the Caribbean.
NuStar Energy has not reopened its terminal on the island of St. Eustatius after Hurricane Irma damaged some tanks.