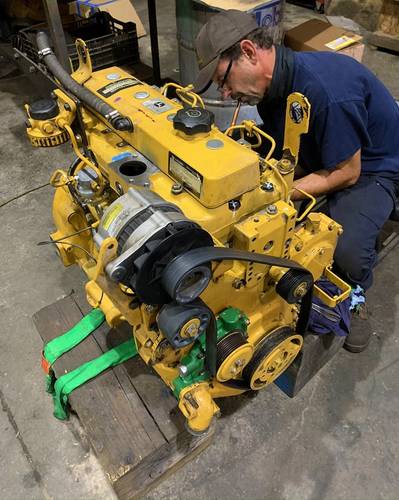 For the first time since its inception in 1982, Bay Diesel has a new president. As voted by their Board of Directors in October 2020, the Senior VP of Sales Willard “Rob” Robins has taken on the role of President, with Scott Wheeler, founder and current president, transferring to a new position as the Chief Executive Officer.

This transition has been 17 years in the making. Rob Robins joined Bay Diesel in July of 2003 as a Sales Engineer, having graduated with a Mechanical Engineering degree in 1994 from UVA. Now, he is a certified instructor through the Milwaukee School of Engineering. “Rob was selected for this job some years ago, and has been well prepared to take Bay Diesel forward for decades to come,” Wheeler said.

“A lot has changed since Bay Diesel started out the back of my Volkswagen Rabbit,” Wheeler added. From new technologies to environmental policies, keeping pace in a constantly shifting culture while meeting customer needs has been a challenge – one that Bay Diesel has and will constantly be arising to. “It’s time we had the next generation bring Bay Diesel into the future.”

Bay Diesel and Generator sells and services industrial generators, as well as provides marine industrial repairs and parts. The core of the business started with diesel engines for generators and maritime requirements; however, over the years, the world has begun to look to new power sources such as natural gas, wind power and more. Bay Diesel has embraced these changes as the territory distributor for Generac Power Systems. Generac offers different energy solutions from diesel to bi-fuel, a combination of diesel and natural gas. Change is both rapid, yet also slow. As the years come, so too will technologies continue to adapt and evolve.

While Robins will be taking over more day-to-day services, Wheeler will still be very much a part of the company as CEO, overseeing more corporate matters.

Robins’ leadership does not end at Bay Diesel, however. Robins also serves on the Board for Festevents in Norfolk and the Living River Trust, having also served on the Board of Directors for the Propellor Club.

“I am excited to continue building on the 38 year foundation that Scott and the rest of our team has established,” Robins said.