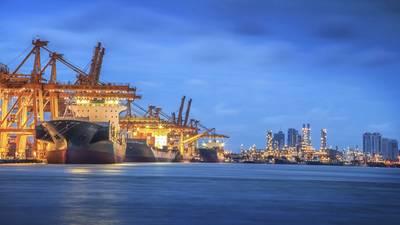 Deutsche Bank has found a buyer for the bulk of its bad ship loans as it seeks to draw a line under sour investments in the sector and to start a fresh push in transport lending, people close to the matter said.

Germany's flagship lender has agreed to sell a non-performing ship loan portfolio with a notional value of $1 billion to investors Oak Hill Advisors and Varde, one of the sources said.

There was no word on the price tag for the bundle of loans.

Finance sources said the portfolio was expected to include some performing loans from shipowners rather than just distressed debt.

"Deutsche has made various efforts to try and reconfigure parts of its portfolio including sales over the past two years. But for various reasons it has not happened. This time round they have been more focused and decisive," one of the sources said.

Deutsche Bank has been looking to shrink its exposure to shipping and other maritime lending, such as port facilities, over the last couple of years. At the end of March, its exposure to the overall sector stood at 4.1 billion euros, of which 3.3 billion euros were for vessel financing.

Exploiting German rules that gave tax credits to owners of container ships, German lenders had become some of the biggest backers of shipowners over the past 20 years.

Two years ago they were estimated to be behind roughly a quarter of the world's $400 billion of outstanding shipping loans, although German banks's share has since decreased as they have cut their exposure amid heavy writedowns.

The clean-up of its transport financing book is part of Deutsche Bank's deep overhaul, which also includes plans to reduce headcount to below 90,000 from 97,000.

Christian Sewing, who became CEO in an abrupt management reshuffle in April, has said while the bank was committed to its international presence, it now wants to scale back its global investment bank and refocus on Europe and its home market after three consecutive years of losses.

After the sale of the sour shipping portfolio only a small volume of non-performing ship loans remains and Deutsche Bank is poised to start increasing its exposure to the sector again, one of the sources said.

In a sign that other banks are also rekindling interest in a sector that is emerging from its worst slump on record, Germany's HSH Nordbank, once the world's biggest ship financier, aims to buy shipping loans from other banks and make new investments in the industry.

HSH Nordbank had needed two bailouts, partly due to its high-risk shipping book, and was privatized earlier this year with taxpayers nursing losses of more than 10 billion euros.