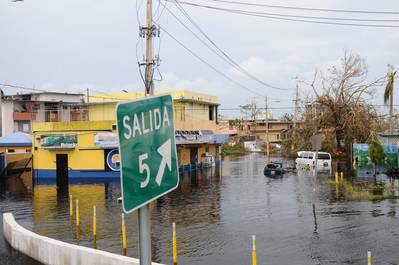 The Trump administration on Tuesday denied a request to waive shipping restrictions to help get fuel and supplies to storm-ravaged Puerto Rico, saying it would do nothing to address the island's main impediment to shipping, damaged ports.
The Jones Act limits shipping between coasts to U.S. flagged vessels. However, in the wake of brutal storms, the government has occasionally issued temporary waivers to allow the use of cheaper, tax free, or more readily available foreign flagged ships.
The Department of Homeland Security, which waived the act after hurricanes Harvey and Irma, did not agree an exemption would help this time.
On Monday, U.S. Representative Nydia Velázquez and seven other representatives asked Elaine Duke, acting head of Homeland Security, to waive the nearly 100-year-old shipping law for a year to help Puerto Rico recover from Hurricane Maria.
Gregory Moore, a spokesman for Customs and Border Protection, an office of Homeland Security, said in a statement that an assessment by the agency showed there was "sufficient capacity" of U.S.-flagged vessels to move commodities to Puerto Rico.
"The limitation is going to be port capacity to offload and transit, not vessel availability," Moore said.
The government's rationale for a waiver after the storms hit Texas, Louisiana and Florida was to ease movement of fuel to places along the U.S. East Coast and make up for temporary outages of high capacity pipelines.
"The situation in Puerto Rico is much different," Moore said in the statement, adding that most of the humanitarian effort would be carried out with barges, which make up a large portion of the U.S. flagged cargo fleet.
Puerto Rico has long railed against the Jones Act, saying it makes the cost of imported basic commodities, such as food, clothing and fuel, more expensive.
"Our dependence on fossil fuel imports by sea is hampering the restoration of services," said Juan Declet-Barreto, an energy expert at the nonprofit group the Union of Concerned Scientists. The refusal to allow the waiver "is raising fears on the island that they are going to be left behind in this disaster."
The United States shipped an average of nearly 770,000 barrels of crude oil and oil products like gasoline and diesel annually to Puerto Rico from 2012 to 2016.
Supporters of the Jones Act, including ship builders, have said it supports American jobs, including ones in Puerto Rico and keeps shipping routes reliable.
Republicans Senator John McCain and Representative Gary Palmer have supported measures to repeal the Jones Act.