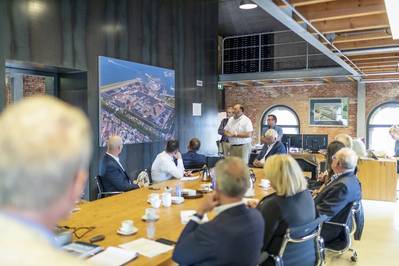 On July 18, 2019, a press conference was held at the Willemsoord historic harbor in Den Helder. The subject of the meeting was the mid-life maintenance program of the Clipper Stad Amsterdam, scheduled to take place in Den Helder in late 2019 and early 2020.

During the maintenance program, Damen Shipyards Den Helder will carry out a scope of work in the former naval dockyard Willemsoord that will increase the efficiency and sustainability of the Damen-built vessel, preparing her for a round the world voyage she will undertake in support of the UN Sustainable Development Goals.

The work that Damen will carry out on the Stad Amsterdam includes replacement of her main engines and diesel generators for equipment with improved levels of efficiency. They will also exchange her sewage installation for a new one that extracts sewage residue, purifying the water for clean, safe disposal.

With this work, the Stad Amsterdam, already boasting green credentials, will become the perfect ambassador for her next mission; a two-year round the world voyage, the SDG World Tour, to promote the seventeen UN Sustainable Development Goals. The goals, adopted by all UN member states, are a call for action by all countries to promote prosperity while protecting the environment. They represent a plan to build a better world for people and the planet by 2030.

During the voyage, the vessel will make seventeen stops, beginning in Amsterdam and finishing in New York. At each of the stops, the mission will focus on one of the seventeen goals, reaching in total 500 million people with the message of the Sustainable Development Goals.

Damen will carry out the work on the vessel at the Willemsoord in the center of Den Helder. This historic location is over 200 years old and with direct access to the sea, is the ideal location for a program of works on such a vessel.

Den Helder is well used to welcoming tall ships – having hosted Sail Den Helder five times in the past with a sixth edition planned for 2023. Stad Amsterdam will arrive in the city in time for the Traditional Ship Festival and will be visible to the public during her five-month visit.

The Stad Amsterdan was delivered by Damen in 2000. She combines the best construction methods of the past with those of the present, with a classic look and feel. The vessel is 76 meters in length and features 31 sails with a total area of 2,200 sq. m.. She sails under the Dutch flag and is available for business events, luxury cruises and adventurous sailing trips.