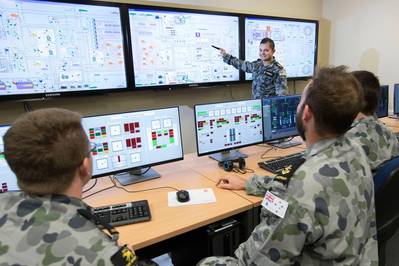 The Commonwealth of Australia (CoA), Department of Defence has contracted Kongsberg Maritime to develop and deliver a new K-Sim Engine simulator model to the Royal Australian Navy’s HMAS Cerberus training facility located south of Melbourne, Australia. The new model will run on the existing KONGSBERG K-Sim Engine desktop simulator delivered to HMAS Cerberus in 2013, which is maintained under a Long Term System Support Program (LTSSP) agreement signed in 2015.

The customized simulator model is a high-fidelity representation of the engine room configuration on the LSD(A) (Landing Ship Dock (Auxiliary)) vessel, HMAS Choules. The full scope of supply consists of the new model with a Big View interactive mimic showing 3D virtual systems and fully interactive switchboard mimics for the engine control room.

The LSD(A) delivery is part of the CoA implementation plan to increase the use of simulators in training. The simulator model has been procured within the Ship Specific Component (NMP 1935) of the Marine Technician Lead in Simulator (MT LIS) and is complementary to the generic simulator capability in HMAS Cerberus (NMP 1930). The model reuses existing K-Sim Engine simulator infrastructure such as base simulator software, in addition to the hardware and the competence already gained by HMAS Cerberus instructors.

Since the Force Structure Review 2008, the Australian Defence Force’s strategic guidance has increasingly focused on the use of simulation to increase force generation capacity in a cost effective manner. One of Navy’s responses to this guidance has been to increase progressively the efficiency and effectiveness of its training and qualification system using simulation-based training ashore to increase the effectiveness of the training and the operational availability of platforms; and reduce the risks that the training poses to the safety of personnel and the integrity of equipment.