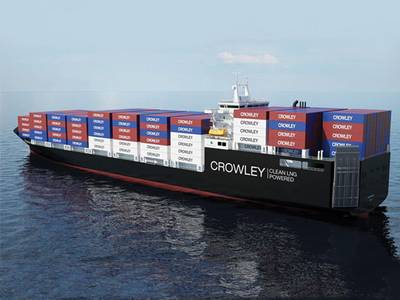 Crowley Maritime last year ordered two LNG-powered combination container – Roll-On/Roll-Off (ConRo) ships with VT Halter Marine. The ships are designed to travel at speeds up to 22 knots and carry containers ranging in size from 20-ft. standard to 53-ft.-long, 102-in.-wide, high-capacity units, along with hundreds of vehicles in enclosed, weather-tight car decking. While LNG is the hot topic of the day, Tom Crowley, Jr., Chairman and CEO of Crowley Maritime, said that it was only a small part of the overall decision. When Crowley made the decision on these newbuilds, there were a couple of considerations. “One, there is a very large supply of natural gas in the United States, and second, there is ever increasing environmental regulations that we wanted to get a jump on,” said Crowley. “So we have a large supply of cheap, clean fuel plus a lot of tough regulations coming down the pike; we thought let’s just take the bite now and be done with it and have clean ships for the next 25 years.”
The Commitment Class, Jones Act ships are scheduled for delivery in Q2 and Q4 2017 respectively, and replace Crowley’s towed triple-deck barge fleet. The new ships will be named El Coquí (ko-kee) and Taíno (tahy-noh), both an ode to Puerto Rico. The vessel design has been brought to life by Wärstilä Ship Design in conjunction with Crowley subsidiary Jensen Maritime. The double-hulled ConRo ships will be 219.5 x 32.3m and have a deep draft of 10m, and an approximate deadweight capacity of 26,500 metric tons. Cargo capacity will be approximately 2,400 TEUs, with additional space for nearly 400 vehicles.
The main propulsion and auxiliary engines will be fueled with LNG.
While the design is done, the technology is proven and the order is in, there is one more small matter to consider: fueling the ships.
“We’ve already ordered the ships, we know we’re going to need the fuel, so that’s the next area of focus to ensure that we get that infrastructure built,” Crowley said. “We have a lot of cheap gas but we have no infrastructure to get it to the market. But I think that we are in a really good spot in Jacksonville because there are a lot of options for us, and I think it’s going to be a lot easier to develop that infrastructure here.”
Overall, though, Crowley did admit that natural gas and LNG will have a tremendous impact on the business of Crowley Maritime overall. “It is going to have a huge impact on a lot of different parts of our business,” Crowley said. “What we’re trying to do now is to compartmentalize it so that we can have some focus and put resources into the areas that are going to give to us the most benefit early. So Jensen, for example, the naval architecture group, is a part of our company that gets involved in things early on design and development, and that is a key market for them.
In addition to fueling its fleet with LNG, and perhaps helping to build infrastructure for LNG bunkering, Crowley sees opportunities to export LNG as fuel.  “We see the opportunity in exporting (very small amounts) of LNG as fuel in containers throughout the Caribbean and Central American region,” Crowley said. “We have an extensive network in the Caribbean basin to supply containership services to all of these markets, and they all have very high energy costs. We have a method of buying the LNG in the U.S. and supplying it to the factories or power plants at a fairly economical level. We are in discussions with a number of other companies to supply this service, and we’re trying to get an export license to do this for other countries.”

(As published in the 1Q 2014 edition of Maritime Professional - www.maritimeprofessional.com)