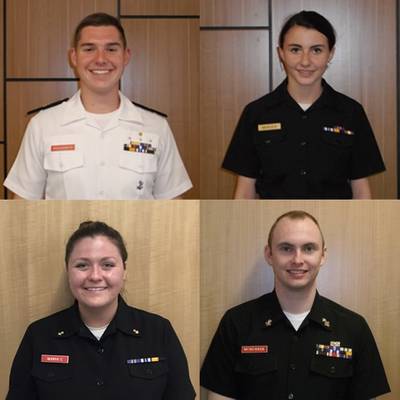 Chosen based on their academic achievement, financial need and plans to pursue a career in the maritime industry, the four recipients are Patrick Goldsmith, Jack McMurrer, Paige Mentuck and Christina Murphy.
Goldsmith, a junior from Huntington, N.Y., is majoring in marine engineering and minoring in international maritime business. He is a Dean’s List member and has earned his USCG 50 Ton Master license with a towing endorsement. Goldsmith served as sophomore class president and is now a training and retention assistant, volunteer coordinator and works for the marine department on campus. He recently completed his commercial shipping experience aboard the Crowley-managed container ship National Glory.
McMurrer, a junior from Harwich, Mass., is pursuing a dual major in marine transportation and international maritime business. He serves as an on-campus EMT, a crew chief and as an assistant disciplinary officer squad leader. He spent the winter semester gaining hands-on knowledge aboard the Crowley-managed tanker Evergreen State and looks forward to his next chance to get out to sea.
Mentuck is a sophomore from Swampscott, Mass., majoring in marine transportation. She is also currently enrolled in the petty officer program. She worked for the MMA training ship, USTS Kennedy, where she helped to prepare the ship for departure from dry dock. She has also completed two sea terms and was a member of the first, all-women college crew team to sail in the Marion (Mass.) to Bermuda cruising yacht race.
Murphy, a junior from Sandwich, Mass., is majoring in marine transportation. She is a member of the MMA lacrosse team and was named “Best Attack” in the 2016 Maritime Cup Tournament. Murphy will spend her summer-at-sea semester aboard the Crowley-managed container ship Yorktown Express.
• Bermuda • Crowley Maritime Corp. • marine transportation