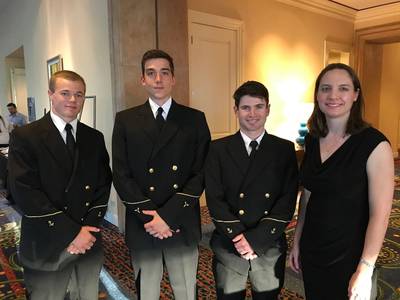 Comerford, class of 2020, is a sophomore from Fallbrook, Calif., and a marine transportation cadet. He chose to attend the Academy because he believes a career on the water would be an “awesome adventure,” and is setting his sights on a cadet position on a Crowley ship in the future. Samuel is thankful to be an awardee of “such an amazing scholarship” and he believes this is a step in the right direction towards achieving his goals.
Yonkman, class of 2018, is a junior from Whidbey Island, Wash., majoring in marine engineering technology, with a minor in marine science. After graduation, he hopes to work on a research vessel. Yonkman spent his commercial cruise aboard the Crowley-managed Horizon Pacific in 2016 and reports that he appreciated the unique experience the ship provided him.
Treptow, class of 2018, is a junior from Huntington Beach, Calif., and has returned to college to pursue a second degree in marine transportation because of the potential for “an interesting career combining relatively high earnings and a desirable schedule.” For his commercial experience, Treptow sailed aboard the Crowley-managed tanker Magnolia State in the Gulf of Mexico this past summer. He reports that he is grateful for Crowley’s “help as he pursues his studies … and prepares to enter the maritime industry.” While he is officially scheduled to graduate in 2019, he is on track to finish a year earlier, during the summer of 2018.
Sayvetz, class of 2017, is a senior marine transportation cadet from Vashon Island, Wash. While operating tour boats in Seattle, he chose Cal Maritime “as a way to upgrade [his] license and enter a hands-on industry full of interesting career possibilities.” In 2016, Sayvetz sailed aboard both Crowley-managed tankers Pelican State and Golden State. He offers a sincere thank you to Crowley for the scholarship and cadetship opportunities. He said both “give him insight and an eagerness to graduate.”
Since 1984, Crowley has provided more than $3 million dollars in scholarship funding for more than 1,000 students. The company has also donated more than $2 million over the years to support other educational programs. In 1994, Chairman and CEO Tom Crowley Jr. established the Thomas B. Crowley Sr. Memorial Scholarship Program in honor of his father who led the company to extraordinary heights before passing away in 1994.
• Cal Maritime • California • California Maritime Academy