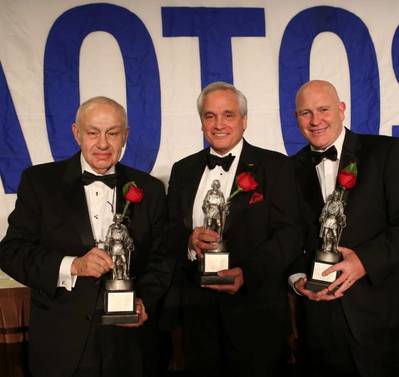 The maritime industry's most prestigious awards were presented at a gala industry dinner and dance held at the Sheraton New York Times Square Hotel, New York City, on November 7, 2014. Recognition was also given to American Seafarers for specific acts of bravery and heroism while at sea.

In announcing the recipients, General Kenneth Wykle, USA (Ret.), Chairman of the USS AOTOS Committee, said: "This year's recipients represent greatly diverse sectors of the maritime industry. Stephen Cotton oversees a significant labor group whose mission is the well-being and fair treatment of the world's seafarers. Joe Cox is well-regarded in international transportation circles and is greatly involved in safety issues. Fred Harris' company has designed and built innovative tonnage for America's sea-going fleet. We enjoyed a good turnout for these three gentlemen, including a large overseas attendance." General Wykle is also immediate past President of the National Defense Transportation Association, and was presented with an AOTOS Recognition award at this year's event.

Stephen Cotton has taken over the duties of General Secretary of the International Transport Workers' Federation (ITF), an international association of more than 700 transportation-related unions from 150 countries. Mr. Cotton had served as the ITF's Maritime Coordinator until he was appointed Acting General Secretary in October 2012. He started at the London-based ITF in 1993, working mainly in the Seafarers Section as the Head of the Agreements Unit.

Under Stephen's leadership, the ITF's Maritime sections made important achievements that would impact many in industry. He has expanded the ITF Inspectorate from 35 to a total of 124 inspectors and 26 other contacts. In 2013, across 52 countries, a total of 9,503 vessel inspections were carried out and $38,429,647 of owed wages was recovered for seafarers. The number of agreements has also increased from less than 2,000 to more than 12,000. Stephen has overseen major FOC policy changes.

Stephen spearheaded a new direction for the Seafarers Section through the International Bargaining Forum. This provides a space for discussion between the ITF and its member unions, and the maritime employers in the Joint Negotiating Group (JNG). It aims to improve seafarers' pay and conditions under IBF agreements through continuing dialogue with key industry players and as a result of strong mutual respect, challenging negotiations have resulted in favorable outcomes. Most recently, both parties have agreed on the need to support the growth of the global shipping market, as well as maintain sustainable and fair employment. As well, crucial to the ITF's Dockers' Section is the GNT Campaign. With the strength and solidarity of dockers across the globe, this campaign pushes Global Network Terminals into guaranteeing decent standards and to secure a fair deal for dockers and all port workers at every port and terminal in the world. The ITF has consistently worked alongside shipping organizations, the ILO and governments, for over a decade, to jointly create and shape the MLC, and is committed to monitoring and assisting its implementation and to persuading more countries to ratify the convention.

Joe Cox graduated from the U.S. Merchant Marine Academy in an accelerated program finishing his final year with his classmates in one-half year graduating on February 10, 1967 to meet the need for officers on the Vietnam sealift. He sailed on the Vietnam sealift for two years and for several years as second and third mate to other parts of the world. When he came ashore, he worked for the Maritime Standards Office of the U. S. Department of Labor where he eventually became a Manager of the Cargo Gear Program. After eight years with the Department of Labor, he accepted a position at the American shipowners association, the Chamber of Shipping of America. He progressed through jobs as Marine Coordinator, Director of Marine Affairs, and Vice President and was elected President/CEO in 1997.

CSA is recognized as the definitive organization representing owners, operators and charterers of U.S. and foreign flag ocean-going vessels, before U.S. and international regulatory, legislative and administrative entities including the U.S. Congress, U.S. Coast Guard, Customs and Border Protection, Department of Homeland Security, Environmental Protection Agency, Department of State, Department of Justice, the International Maritime Organization and the International Labor Organization. It provides a voice of the maritime industry operating in the U.S. to support sound public policy through legislative and regulatory initiatives to promote marine safety, maritime security, maritime personnel issues and environmentally responsible policies and operating practices.

Joe Cox has been Chairman of the Board of the National Cargo Bureau for two years during his ten years on its board and held various positions including chairman. His other affiliations have included International Cargo Gear Bureau, International President of the Propeller Club of the Unites States and President of the Marine Gas Hazards Control Program He received an MS from the University of Southern California in Safety Management.

Frederick J. Harris became president of General Dynamics NASSCO and a vice president of General Dynamics Corporation on January 1, 2006. For more than four decades, Harris has worked to foster innovation and realize excellence in shipbuilding. His extensive exposure to the maritime industry has provided him with a breadth of knowledge and a unique viewpoint in current initiatives facing the business. Mr. Harris began his shipbuilding career in 1973 as a senior engineer for Electric Boat's Trident ballistic missile submarine program. Harris' thorough knowledge of ship construction processes and design and build practices earned him a succession of promotions.

For his accomplishments as program manager of the VIRGINIA Class submarine design phase, Harris received the Maine Maritime Academy Outstanding Alumni Award for the Year 2000 and in 2002, received the annual William M. Kennedy Award from the Society of Naval Architects and Marine Engineers. In 2003, he was included on the Maine Maritime Academy's Wall of Honor for his accomplishments in the marine field. He was the 2010 recipient of the Harold E. Saunders Award, given by the American Society of Naval Engineers, for his significant contributions to naval engineering. Harris is currently a Board Member of the National Academy of Sciences, Transportation Research Board, a Board Member of the Shipbuilder's Council of America, and Chairman of the American Delegation of JECKU, a worldwide shipbuilding organization.

He is frequently called upon to offer his perspective to revitalize the maritime industry and associated industrial base. A graduate of Maine Maritime Academy, Fred Harris sailed for several years as a U.S. Merchant Mariner, notably aboard the U.S. registered SS Trans globe, the most decorated American merchant ship of the Vietnam War. In 1972, he received a master's degree in business administration from Babson College, graduating with distinction. In 2010, Harris received an honorary doctorate degree in science from MMA.

Proceeds from the AOTOS event benefit USS community services abroad for the U.S. merchant marine, seafarers of all nations, and U.S. government and military overseas. The recipients shared the evening with a group of American seafarers who were honored for acts of bravery at sea.

USS continues to provide community services for the U.S. Merchant Marine, the American Armed Forces, and seafarers of the world. USS, a non-profit agency established in 1942, operates centers in six foreign ports in Europe, Asia, and Africa and in the Indian Ocean, and also provides seagoing libraries to American vessels through its affiliate, the American Merchant Marine Library Association.