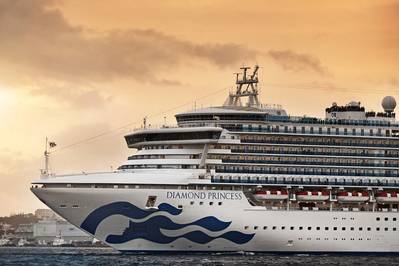 Princess Cruises, the operator of two coronavirus-stricken ships, said on Thursday it would suspend global operations of its 18 cruise ships for two months, sending shares of its parent company Carnival Corp down 22% in premarket trading.

The Grand Princess was denied entry to San Francisco Bay last Wednesday en route back from Hawaii as authorities learned some passengers and crew had developed flu-like symptoms, and that patrons from an earlier cruise to Mexico aboard the same ship had tested positive for coronavirus.

The Diamond Princess cruise ship, which at one point had the highest number of infections outside China, was quarantined off the coast of Japan for the disease in February. Of those on board about 700 people became infected, and six have died.

The cruise line said the suspension was out of an abundance of caution.

“It is our intention to reassure our loyal guests, team members and global stakeholders of our commitment to the health, safety and well-being of all who sail with us,” said Jan Swartz, president of Princess Cruises.