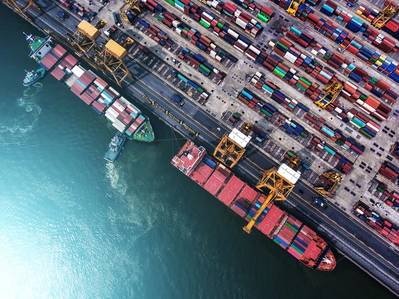 Global trade tensions have captured headlines in recent months, as the imposition of a series of tariffs and counter-tariffs by various global trade counterparts has raised questions about the possibility of a trade war. Such development could potentially have an impact on global trade flows, and, consequently, the companies which facilitate international movement of goods.

Though the situation is still developing and the final impact is uncertain, Gregory Draco, the Chief U.S. Economist at Oxford, predicted in July that the tariffs would create an 0.1 percent to 0.2 percent drag on U.S. GDP. While the expected reduction is rather modest, Mr. Draco also noted that these tariffs “may underestimate the shocks to private sector confidence,” thus potentially creating more pronounced headwinds to global trade flows and growth. If trade tensions result in a full-out trade war, container shipping companies will likely face pressure, as trade volumes decline and the companies evaluate their supply chains.

Given the concentrated nature of the container shipping industry, it is unsurprising to see high lessee concentrations in the portfolios of container lessors, which count major container liners among their largest customers. Container lessors have become increasingly important owners and purchasers of container boxes, as the shipping companies are leasing more boxes in order to preserve capital. According to Drewry Maritime Research, lessors now control over 50 percent of global container inventories (by TEU), a 35-year high and up from the low of 41 percent in 2009. As such, the container lessors predictably have substantial exposure to most of the major container shipping lines, and thus could suffer if that industry comes under strain because of a trade war.

Historically, bankruptcies of sizable container shipping companies have been rare. Therefore, the filing for bankruptcy by Hanjin Shipping Co., Ltd. in August 2016 represents a rather unique case study of the impact of default by a large obligor on performance of the marine container collateral portfolios.

At the time of filing, Hanjin was South Korea’s largest container line and the world’s seventh-largest container carrier in terms of capacity. Almost two years later, we can examine the nearly fully realized impact of a bankruptcy by a large lessee on several performance metrics, as well as the loss mitigants utilized by the leasing companies in that case.

One of the largest container lessors, Textainer Group Holdings Limited, attributed $7.2 million of the decrease in its rental income in Q4 2016 to Hanjin’s collapse; it had leasing revenues of $105.9 million for that particular quarter. Textainer also wrote down $44 million of its approximately $237 million in net book value (NBV) exposure to Hanjin due to impairment and bad debt expense in the same quarter. Similarly, the largest container leasing company, Triton International Limited, in its 2016 year-end report stated that it had set aside $23.4 million as a provision for losses associated with its exposure to Hanjin, which amounted to assets with an NBV of approximately $243 million. Triton also estimated $6.3 million in lost revenues in Q3 2016.

Notably, another publicly listed container lessor, CAI International, Inc. (CAI), with exposure to Hanjin only amounting to 2.3 percent of the value of its fleet (in TEU), saw revenues climb in the quarter following the bankruptcy. This is reflective of the more general short-term effect from the bankruptcy, in which, due to global excess capacity of vessel space, other carriers have been able to accommodate Hanjin’s customers, tonnage and routes. Temporary displacement of containers leased to Hanjin resulted in a short-term upward pressure on lease rates, which benefited the lessors. According to Wells Fargo Securities, the lessors also got over the subsequent temporary pressure on utilization rates due to the need to release recovered containers, with the average utilization rate for the public container lessors in the first quarter of 2017 increasing 130 basis points (bps) quarter over quarter to 95.2 percent.

In the aftermath of Hanjin’s bankruptcy, all lessors demonstrated the ability to recover a substantial share of stranded assets. Both Textainer and Triton had recovered approximately 95 percent of the lost containers leased to Hanjin as of August 2017. Both firms have subsequently re-leased the majority of the recovered containers, with Textainer reporting that they have released 60 percent of the recovered containers as of August 2017. Both companies were able to recover more containers relative to the write-downs in the quarter following the filing by Hanjin.

In addition to recovery efforts, some container lessors were able to mitigate industry concentration risk through the use of insurance. Thus, Triton has claimed $67 million in insurance receipts as of February 2018 related to lost Hanjin leasing revenues and recorded a gain of $6.8 million through the same date, while Textainer has collected $50 million in insurance claims out of the $80 million they sought, per their first quarterly report of 2018. At the same time, Textainer warned that the availability and cost of credit insurance to cover future shipping line defaults might be seriously affected by the payouts incurred by the insurance carriers in relation to Hanjin’s bankruptcy in an April 23, 2018, SEC filing.

Helped by the general improvement in the economic environment, Triton and Textainer experienced increases in utilization rates between 250 bps and 400 bps since the lows in 2016, according to their most recent investor presentations. Quarterly leasing revenues and operating profits for both companies have also rebounded since the third quarter of 2016, as shown in Exhibit 1 and Exhibit 2 below (Source: the companies’ financial reports):

The lessors, buoyed by the favorable economic tailwinds, have been able to withstand the bankruptcy of a large container shipping customer without any long-lasting negative effects, and their risk mitigation strategies helped to buffer the impact to their core financial stability. While the industry has demonstrated the ability to work through the loss of a major customer, their ability to withstand any future bankruptcies, if world trade flows are interrupted, remains uncertain.