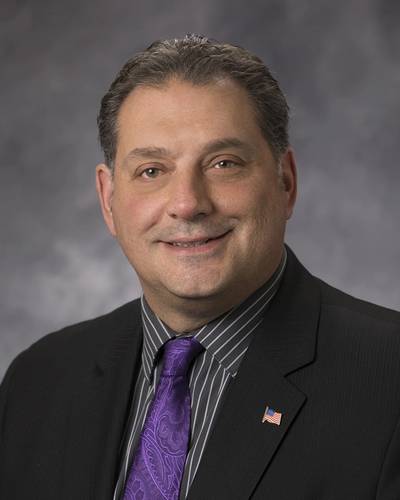 Commissioner Michael “Mike” Jugovich was appointed by the St. Louis County (SLC) Board to complete the remaining term of former Commissioner Pete Stauber on the Duluth Seaway Port Authority Board, effective January 8, 2019.

Jugovich has held many positions over the years. He is a retiree of the United Steelworkers of America, Local 2705, Hibbing Taconite Company. He finished his career as an equipment and warehouse manager in the agglomerating department. In 2000, Jugovich was elected to the Chisholm City Council, serving six years before being elected mayor in 2006. He served as mayor for a decade before being elected SLC Commissioner of the Seventh District in 2016. He was elected vice chair of the SLC Board in January 2019, and currently serves as chair of its Public Works and Transportation Committee.

A graduate of Chisholm High School, Jugovich attended Range Technical College, Hibbing  Community College, and The College of St. Scholastica. He has given back to the Iron Range region through his work in several organizations, including the Chisholm Economic Development Authority, Youth in Action, Range Association of Municipalities and Schools, Chisholm-Hibbing Airport Authority, Governor’s Workforce Development Council, and the Minnesota Assistive Technology Advisory Council. Commissioner Jugovich currently resides in Chisholm with his significant other, Melanie. Together, they have four adult children.  His appointment to the Port Authority Board runs through Dec. 31, 2021.

The Duluth Seaway Port Authority is governed by a seven-member Board of Commissioners—two appointed by the Governor of Minnesota, two by the St. Louis County Board and three by the Duluth City Council.