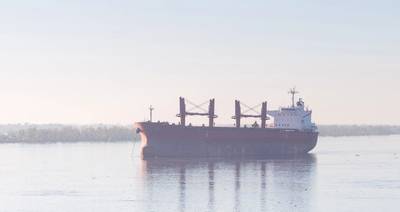 Ships transporting cargo from Argentina's Rosario grain hub through the Parana River are having to reduce their cargoes after a bank collapse obstructed the navigation channel, exporters told Reuters.

Dredgers are working in the Parana to the south of the Rosario complex to try to restore the necessary depth of water for export traffic, but at present have no estimate of when normal operations on the grains superhighway can resume.

"Ships cannot leave because they do not have the adequate safety margin," Guillermo Wade, manager of the Chamber of Port and Maritime Activities (CAPyM), told Reuters, saying that ships were having to reduce their cargo weight to be able to pass.

Argentina is the world's No. 3 soybean and corn exporter, as well as its top supplier of soymeal livestock feed used to fatten hogs, cattle and poultry from Europe to Southeast Asia.

Disruption in shipments from Argentina can throw off global trade flows as importers look to rival suppliers such as Brazil and the United States to fill supply gaps.

About 80% of the country's agricultural and agro-industrial exports are shipped from the Rosario region.

The water level on the Parana River has already fallen to a near 50-year low, hampering export traffic and causing local industry $244 million in losses over the past four months.

Gustavo Idigoras, head of the national chambers of grains exporters and processors (CIARA-CEC), said the riverbank collapse was exacerbating an already difficult situation for operators at the peak season for the export of soy and its by-products, and for corn.

"Those ships that were already loading at the 32 terminals in that area are loading even less than they were already," he said.