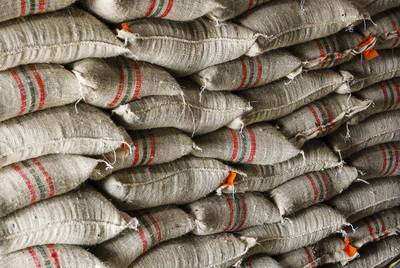 Coffee importers in some of the largest consuming countries are stockpiling, bringing forward orders by up to a month to avoid shortages if supply chains are disrupted by coronavirus lockdowns.

The global pandemic has prompted governments around the world to impose severe restrictions on movement in a bid to stem the spread of the virus. Supply chains are backing up as air freight capacity plunges and companies struggle to find enough truck drivers and shipping crews.

In contrast to sharp price declines in many commodities, coffee prices are higher on strong demand and expectations that supplies, which were tight even before the virus spread, will tighten further. Growers in major exporters Brazil and Colombia, among other countries, have seen prices rise.

"Everyone is trying to speed things up," said Carlos de Valdenebro, Colombia country director for specialty exporter Caravela Coffee. While Colombia is currently between harvests, he said he was concerned about requests for faster shipments as most exporters that still have stocks in the country have temporarily cut operational capacity.

A major U.S. coffee importer who would not comment on the record said U.S. roasters were acting to speed up deliveries from other origins as well, such as Central America.

"We had requests from buyers in all major countries, U.S., Japan, Germany," said the head of one of the largest coffee exporters in Brazil, the world's leading producer, asking not to be named because he did not want to discuss the matter publicly. "Basically all the largest roasters in the world. They want to have the beans there quicker, just in case."Benchmark ICE arabica coffee futures are positive so far in March. That stands in

contrast to a 50% fall in benchmark international crude oil futures and a 15% plunge in the Dow Jones stock index.

Europe and the United States are short tens of thousands of freight containers, having received only a trickle from China during its coronavirus shutdown, while shippers are also struggling with quarantines at ports and crew shortages.

"Roasters and traders are stocking up because they anticipate supply disruption," said a London-based coffee trader, who said big roasters are buying spot cargoes. "There are some (orders) I can't fulfill."

Demand for coffee
Prices in Brazil are close to record levels in local terms as well, nearing 550 reais per 60-kg bag. Farmers there tend to sell when prices go above 500 reais per bag.

Brazilian coffee exporters association Cecafe said shipments are normal for now, but said shipping lines have advised that container shortages might occur in the coming months, when Brazil could harvest its biggest crop ever, around 70 million bags according to independent analysts.

Adding to roasters' concerns are reports that the virus could cause labor shortages that would hamper coffee harvesting in key regions such as Central and South America, where many coffee farms are yet to be mechanized.

"The harvest will start at the end of April, beginning of May, and what we have to be prepared for is the high probability that this confinement is extended beyond the 13th," said Roberto Velez, the head of Colombia’s growers’ federation.

The Andean country started a 19-day national quarantine last week. Though farmers and their employers are exempt from quarantine measures, moving and housing some 150,000 workers in sanitary conditions will be difficult, he said. So will ensuring beans are being processed and shipped, he added.

"We have maybe one of the best prices in history," said Velez. "But with that price we're facing logistical problems, coronavirus, fear."