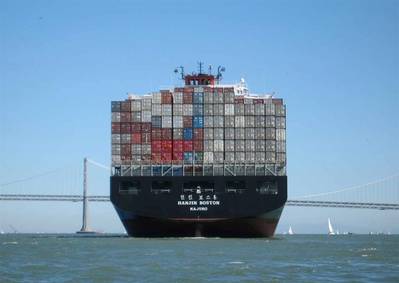 The slowdown in China’s economy poses some risks for container shipping, according to Drewry Maritime Research.

According to a new report from Drewry Shipping Consultants Ltd, the risks from a slowdown in Chinese consumption to container shipping are far smaller than for the dry bulk sector, but they are not inconsiderable and will contribute to slowing world box growth.
Container-shipping lines, already concerned about demand from struggling economies in Europe and many emerging markets, can now add China to their list of problems.
The analyst is now predicting a growth in Chinese container throughput of 4.9%, down from 5.8%. This shortfall accounts for around 1.85m teu, roughly 1% of world traffic in 2014.
Greater China (including Hong Kong) represents approximately 30% of all container moves in the world, having nearly doubled its share since the start of the century when its expansion was given a major boost following entry into the World Trade Organization (WTO), says Drewry.
Clearly, with such a large piece of the pie, the direction of the Chinese economy has a huge bearing on world port throughput growth, Drewry says. The IMF was not moved to change its forecast for China in its latest World Economic Outlook, keeping GDP growth pegged at 6.8% for this year and 6.3% in 2016.
These are still numbers that most other economies can only dream of, but the slowing trend has prompted Drewry to downgrade its outlook for Greater China, and subsequently, world container traffic.
Simon Heaney, senior manager of supply chain research at Drewry: “For shipping lines, any decrease isn't particularly great at this moment,” he said, adding that “in the grand scheme of things…it’s a risk but a small one.”
Data from the World Trade Organisation indicates that China’s merchandise imports were down by 15.5% in the first six months of 2015 with merchandise exports up only 1%.
• Drewry Shipping Consultants Ltd. • Europe • International Monetary Fund