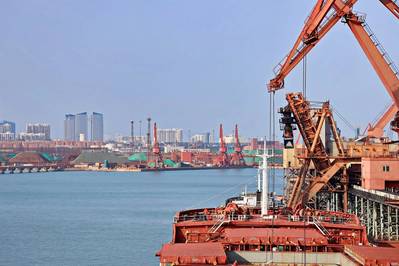 The Baltic Exchange's main sea freight index, which tracks rates for ships ferrying dry commodities around the world, posted its biggest weekly gain ever, underpinned by a rebound in global commodities trading as iron ore demand from China picked up.

The 35-year old index, which reflects rates for capesize, panamax and supramax ships, has now surged nearly 300% since tumbling to a low of 393 points in May following a freeze in global trade due to coronavirus-led lockdowns.

"Most of the strength is due to increased Chinese steel mill demand for iron ore coupled with the increased production and exports out of Brazil," said Randy Giveans, vice-president, equity research, at Jefferies.

"The length of the rally will all depend on how aggressive China is in restocking their depleted inventories as well as the ongoing recovery and stimulus activity in Asia."

Helping the sentiment during the week, Brazilian iron ore miner Vale SA said on Wednesday it could reopen mines in the Itabira complex shuttered due to coronavirus.

The supramax index rose 9 points, or 1.4%, to 657, marking its eighth straight weekly rise.