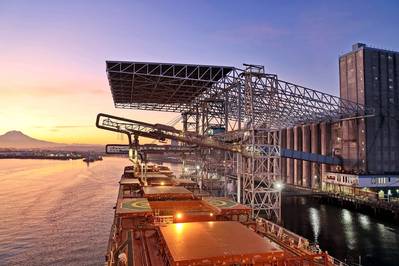 China has been buying U.S. soybeans at what seems like a breakneck pace for about two months now, increasing the probability of record U.S. exports to the Asian country over the next year.

But while a record volume becomes more realistic as the sales pile up week after week, the lower price of U.S. soybeans relative to most prior years means that less ground is being covered when it comes to the Phase 1 trade deal, which is based on the exported value.

Further, it has been only three years since China bought U.S. soybeans to this extent, so the current “breakneck” pace is actually not too far out of the ordinary when compared with previous years.

Through Aug. 27, China had booked 13.53 million tonnes of U.S. soybeans for delivery in 2020-21, which started Sept. 1. Since then, at least 1.1 million tonnes have been sold to the world’s leading buyer, which likely places the haul to-date at an all-time high.

That included a total of 664,000 tonnes confirmed on Tuesday, which was the largest single-day sale of U.S. beans to China in seven weeks.

Record scenario?
Past sales paces and simple math suggest China should be on track to at least match 2016-17, which featured record U.S. soybean exports to the Asian country of more than 36 million tonnes.

China has booked nearly 15 million tonnes of U.S. beans for 2020-21 so far, and unknown buyers have grabbed about 7.6 million. Conservatively assuming that about half of the unknown sales are to China, that would boost the total close to 19 million tonnes.

On average in the years just before the trade war, China bought roughly 90% of its annual U.S. soybean haul by the end of December, since it usually focuses attention on Brazil starting in January. Between September and December, China would book at least a million tonnes of U.S. beans per week, on average.

If the minimum 2020-21 target was to match the record 36 million tonnes, the balance could be sold by the end of 2020 by notching weekly Chinese commitments around 1 million tonnes. That falls in line with past paces and demonstrates the feasibility of such a large volume.

But just because the scenario pencils out, that does not mean it will play out. Sales must turn into actual shipments, and previous seasonal Chinese buying patterns might be less reliable post-trade war.

Lower value
In a regular calendar year, roughly half of the value of U.S. agricultural and related products exported to China comes from soybeans. The Phase 1 trade deal suggests the total must reach at least $36.5 billion in 2020, which would safely be a record.

The export value of China’s known soybean bookings to date for the 2020-21 marketing year is probably around $5.5 billion, though some of that will be shipped in calendar year 2021.

From mid-February through August, the United States exported about $1.5 billion worth of soybeans to China, down 30% on the five-year average. If counting from January, the total is about $2.4 billion, down 40%. That means 2020 is nowhere close to on pace to fulfill half of the Phase 1 target with soybeans.

Calendar year 2020 has been dismal for U.S. soy shipments to China. According to data published by the U.S. Census Bureau on Thursday, the January-July volume totaled just 4.2 million tonnes, the smallest since 2004.

Export inspection data implies August soybean shipments to China around 2.3 million tonnes, the best since December and the second highest for the month behind last year. That would bring total 2019-20 U.S. exports to China just above 16 million tonnes or 590 million bushels, up 20% on the year but down 56% from the 2016-17 record.