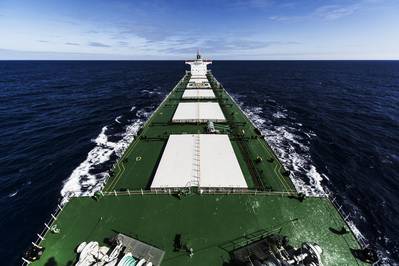 If you were looking for evidence that China's economy has lost momentum, you may be tempted to think that you've found it in the unimpressive growth, or lack thereof, in imports of major commodities in the first quarter.

This would seem to confirm the narrative of slowing growth in the world's second-largest economy amid the ongoing trade and tariff dispute with the United States.

But as usual the devil is in the detail and the seemingly lacklustre performance by the world's largest importer of commodities may not be quite as weak as it first appears.

Iron ore imports increased 4 percent to 86.42 million tonnes in March from February, which doesn't look that weak especially in the light of the disruption to supply caused by the tailings dam disaster in Brazil and a tropical cyclone in Western Australia.

But for the first quarter, iron ore imports were 260.8 million tonnes, a decline of 3.5 percent for the same period last year.

To make matters worse, it's likely that the real impact of the Brazil mine closures and the loss of several days of exports from Western Australia will only be felt in April's import numbers.

Up until now it appears Brazil's Vale has been able to continue exports at more or less the same rate by using up stockpiled ore, but it's questionable as to how long they can keep this up.

Tropical Cyclone Veronica hit the top iron ore mining region of Western Australia in late March, meaning the lost cargoes will only show up in April and perhaps in May.

But similar to iron ore, the first quarter figures are soft, with imports dropping 1.8 percent from the same period last year to 74.63 million tonnes.

But there are caveats to the iron ore and coal numbers.

UNEXPECTED CONSTRAINTS
For iron ore, it's quite likely that Chinese steel mills and traders couldn't actually get all the product they wanted, as can be seen by the sharp rise in spot prices over the quarter.

Ore with 62 percent iron content <MT-IO-QIN62=ARG>, as assessed by Argus Media, has jumped 32 percent since the end of last year to $96.15 a tonne as of April 12, the highest in nearly five years.

The pricing move suggests a lack of supply, rather than weak demand, is behind the decline in China's first quarter iron ore imports.

For coal, the issue is not supply, but more of China curtailing its demand, with customs authorities believed to be discouraging growth in imports in order to keep domestic prices at levels high enough to ensure the miners remain profitable.

This artificial cap on coal imports has led to strong swings in monthly imports in recent months, with a weak December followed by a strong January, followed by a weak February and a strong March.

With coal imports seemingly not being driven by market fundamentals, it makes it difficult to read too much into their overall significance for the state of China's economy.

Traditionally the market focuses more on unwrought copper, so the 4.3 percent drop to 1.18 million tonnes in first quarter imports from the same period in 2018 would not fill an observer with confidence about the state of China's vast manufacturing sector.

However, the 20 percent leap in imports of ores and concentrates to 5.59 million tonnes does mean that overall China is importing more copper, it is just changing the state in which it is procured to one that requires domestic beneficiation.

The one commodity import which seems to show unambiguous strength is crude oil, where first quarter imports were up 8.2 percent to 121.17 million tonnes, equivalent to about 9.83 million barrels per day (bpd).

This represents an increase of about 740,000 bpd over the first quarter of last year, making China the key centre of demand growth for crude oil.

Again, there are a couple of caveats, the first being that it's not yet known how much of the additional crude flowed in strategic or commercial storage sites, especially since crude prices were relatively low at the end of last year and the start of this year, which may have encouraged refiners to build inventories.

The second caveat is that some of the extra crude imported is being exported as refined products, with customs data showing product exports were about 1.46 million bpd in the first quarter, up about 190,000 bpd from the same period last year.

But even with those caveats, crude oil imports remain the best indicator that Chinese commodity demand is resilient, even if it is a stretch to call it strong.