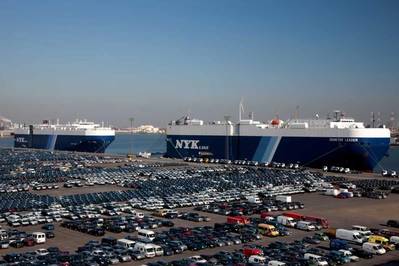 Australia has fined and convicted Japanese shipping firm Nippon Yusen Kabushiki Kaisha (NYK) for operating as a cartel in relation to the transport of vehicles into the country, its competition regulator said on Thursday.

The charges relate to the transportation of motor vehicles to Australia between 2009 and 2012, the Australian Competition and Consumer Commision (ACCC) said in a statement.
A new law in Australia criminalised cartel behaviour in 2009, although the activity had been going on since at least February 1997, the ACCC said.
"The cartel ... affected vehicles transported to Australia by NYK and other shipping lines from locations in Asia, the U.S. and Europe on behalf of major car manufacturers including Nissan, Suzuki, Honda, Toyota and Mazda," it said.
Australia's Federal Court has ordered NYK to pay a fine of A$25 million ($20 million), the second-highest ever imposed by the regulator. It is the first successful prosecution under the criminal cartel provisions of a 2010 Act.
The company, however, had received a lower fine than what it could have been due to an early guilty plea, contrition, and cooperation with investigators.
NYK in a statement said the Court had recognised the value of its guilty plea and cooperation with the ACCC investigation, as well as "the efforts NYK has made since 2012 to ensure that contraventions of this type cannot occur again."
"NYK has taken a large range of measures to strengthen the culture of compliance with competition laws and prevent any recurrence of the contraventions that occurred in the Car Carrier Group in the years prior to 2012," NYK said, quoting from the Court's judgment.
The penalty for cartel conduct under Australian competition law is the greater of $A10 million, triple the benefit attributed to the offence, or 10 percent of the corporation's annual turnover in Australia.
NYK, which is capitalised at 360 billion yen ($3.3 billion), entered a guilty plea on July 18, 2016, in the Federal Court.
An investigation into Japanese shipping company Kawasaki Kisen Kaisha (K-Line), which was charged last November, is continuing, the ACCC said.
($1 = 1.2617 Australian dollars; $1 = 110.6100 yen)
(Reporting by Melanie Burton; Additional reporting by Tom Westbrook; Editing by Tom Hogue)
• Nippon Yusen Kabushiki Kaisha • Nissan • Suzuki