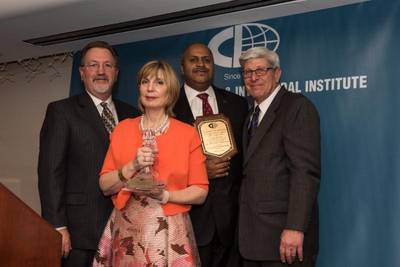 Carol Notias Lambos, partner of The Lambos Firm LLP, was presented with the 2016 CONNIE Award by the Containerization & Intermodal Institute (CII) for her active involvement in maritime labor and positive influence within the international transportation industry. The New York and New Jersey Sandy Hook Pilots Association received the Lifetime Achievement Award.

The sold-out Connie Luncheon with 365 attendees was held Monday, December 5, 2016 at the Metropolitan Room at the Newark Club, and also saw record-breaking scholarship presentations, totaling more than $125,000.

For 45 years, Connie recipients have been acknowledged for their significant contributions to containerization in world trade and the transportation industry. This prestigious award honors their individual accomplishments or the companies at which they have built their careers and the impact they have made.

In addition, Michael J. DiVirgilio, CII president, led a tribute and showed an eight-minute video o the life of The Honorable Helen Delich Bentley, a maritime journalist and legislator, who passed away in August at age 92. Ms. Bentley was also a board member and long-time supporter of CII.

"Those inspiring individuals of intermodalism had the courage to innovate, incubate, and initiate the great container revolution that made the world a much smaller place and improved the standard of living and quality of life for so many," said Ms. Lambos, on accepting her award, presented by John Atkins, president of Global Container Terminals, and addressing the honor of being in the company of previous Connie Award recipients.

Since the start of her career, Ms. Lambos has remained engaged in issues regarding the method and manner, particularly in the labor-management arena, in which containerized cargo is transported and handled.  She has been instrumental in the production of white papers and presentations regarding the international supply chain, port productivity and the economic importance of the marine transportation system.

Recently, Ms. Lambos has been at the forefront in exploring issues concerning funding the costs of maritime security and the implementation of the Transportation Worker Identification Credential (TWIC) program. She serves on the Coast Guard's Area Maritime Security Committee of the Port of New York and New Jersey.

"For three centuries, our highly skilled pilots have devoted their careers to providing safe passage through the Port of New York and New Jersey. And looking to the future, I am confident that we are prepared for the challenges that lie ahead," said Captain Schoenlank, referring to the raising of the Bayonne Bridge that will allow for mega-carriers to call at the port.

The services of the nearly 80 self-employed pilots that make up the New York and New Jersey Sandy Hook Pilots Association, known collectively as the Sandy Hook Pilots, are crucial to the majority of maritime commerce and maritime industry in this region as they guide vessels from the sea to their berths within the port.

Trained at the maritime academies and universities, the licensed maritime pilots board oceangoing containerships, passenger vessels, other freighters, and tankers, customarily on the open sea near the entrance to the harbor. Today, the Sandy Hook Pilots provides pilotage service for the bi-state port, the Hudson River, and Long Island Sound.

At the Connie Awards event, CII also carried out its education mission by presenting more than 25 scholarships to students and institutions that are committed to educating the future generations of the transportation industry. The record-breaking number of scholarships was a result of the generous donations from industry leaders and companies who want to invest in the industry's future.  Under the auspices of CII, more than $700,000 in scholarships have been awarded since 1992.

"The record-breaking number of scholarships proved what we already knew-that industry is filled with generous leaders who understand the importance of investing in the future," said Mike DiVirgilio, President, CII.  "It is our mission to educate and support young talent to encourage them to stay in the industry, and today we are seeing our vision truly take shape."

Presented by the Honorable Steven Blust, former chairman of the Federal Maritime Commission and vice president of CII, the institute awarded scholarships to students from Rutgers and Seton Hall Universities and the State University of New York Maritime College at Fort Schuyler pursing careers in the industry, as well as awarding the Richard A. Simpson scholarship to a midshipman at the United States Merchant Marine Academy. In an effort to support on-going education, CII awarded a scholarship to the Careers in Transportation Scholarship Fund at Union County College, as did The Lambos Firm and the U. S. Maritime Alliance.

Finally, Global Container Terminals donated a four-year full scholarship to a midshipman to SUNY Maritime College. Global has had a tradition of giving full education opportunities and presently is supporting three deserving students at the school.
All of the recipients have demonstrated a commitment to excellence within their respective programs of study.