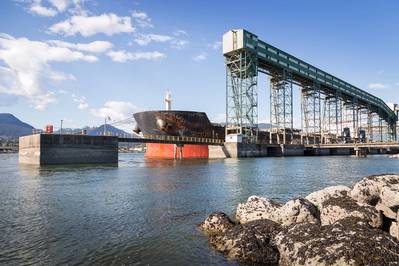 Canadian grain exporters are boosting sales in a slumping global economy, as demand for commodities like oil weakens and frees up railway space.

Brisk crop movement in a country that relies heavily on rail is a bright spot during pandemic lockdowns, which have hammered most industries.

Canada exported a record 959,900 tonnes of wheat in the week ended May 10, although year-to-date volumes from Aug. 1 are behind. Canola exports are 8% ahead of the year-ago pace.

In the 2019-20 crop year to date, shippers have unloaded more than 19 million tonnes of grain at Vancouver, up 6% from average, despite a disruptive rail strike and protests earlier, according to Quorum Corp.

"We've been shipping grain like there's no tomorrow," he said.

"It has been a pleasant surprise for producers to haul all their commodities when they want to."

A tougher test will come in autumn and winter, when a new harvest is ready and as other sectors may recover, said Wade Sobkowich, executive director of Western Grain Elevator Association.

By then, Canadian Pacific Railway will be running additional high-volume grain trains to handle another big potential harvest, as part of its long-term upgrades, said Joan Hardy, CP's vice president of grain and fertilizer sales.

"There's a great crop in the ground and our customers are telling us conditions look really good," Hardy said.