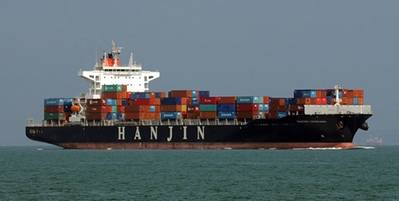 The Hanjin Louisiana, one of the containerships caught up in the collapse of the South Korean shipping company Hanjin, has finally docked in Singapore after several weeks of uncertainty at sea.
Among those onboard the containership were four Scottish cadets, who disembarked in Singapore on September 28 for flights back home to the U.K., BBC reports.
The four trainee officers studying at the City of Glasgow College – Ruaridh Hanna, David Gorniak, Graeme Deacon and Gavin McPhail – were among an estimated 2,500 seafarers who have been unable to leave their ships while they have remained in international waters to avoid arrest by creditors, according to maritime trade union Nautilus, who provided advice and assistance to the cadets, and liaised with training providers, the shipping company, Liberian state authorities and the U.K. Maritime & Coastguard Agency to help secure arrangements for them to be taken off the ship. The union has also worked with of Scottish MP Drew Hendry to bring the case to the attention of government ministers.
“Many areas of concern remain should such an incident occur again in the future, and Nautilus will be pursuing matters both through industry bodies such as the Merchant Navy Training Board and directly with training providers,” said Nautilus national secretary Jonathan Havard. “It is clearly unacceptable for cadets to be left in a position of uncertainty about food and water supplies, about being at anchor indefinitely potentially affecting their training on board and college schedule, and about their safety in an area of piracy.”
Havard continued, “Some sponsoring companies — given their lack of urgency in such circumstances — fail to appreciate that the cadets are not merely numbers which make up the requirement to train in return for signing up to the U.K. Tonnage Tax scheme.”
• Coastguard Agency • Merchant Navy Training Board • Singapore