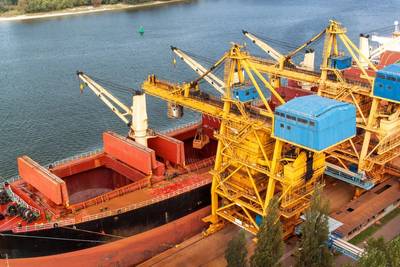 It has been quite awhile since the global bulk carrier market has had much to cheer about, but U.S. dry bulk shippers are set to post strong revenue growth in the next two years thanks to soaring Chinese demand for high-grade iron ore from Brazil and Australia.

To combat severe winter smog, China has slashed iron ore output, pushing steel mills in the world's second biggest economy to import more high-grade ore.
China also wants to make pollution control a priority for the next three years.
"China's increasing demand for higher quality iron ore, along with greater supply coming online from Brazil, has boded well for capesize rates in recent months ... we believe this trend will continue going forward," Gary Vogel, the chief executive of New York-based Eagle Bulk Shipping Inc, told Reuters.
Average rates for capesize vessels — massive ships that typically transport 150,000-tonne cargoes — are expected to jump to about $24,000 next year from less than $14,000 in 2017, Morgan Stanley analyst Fotis Giannakoulis said.
Iron ore demand from China should rise 4 to 5 percent on average over the next three years, in pace with demand in 2017, said Seanergy Maritime Holdings Corp CEO Stamatis Tsantanis.
While Australia is the top iron ore exporter to China with 652 million tonnes exported from Western Australia last year, Brazil has been catching up rapidly with better quality ore.
Exports of Brazilian iron ore to China rose nearly 16 percent to 214 million tonnes in 2016, according to Brazil's Ministry of Foreign Trade. (http://bit.ly/2CiQZNK)
Meanwhile, Western Australia's Chinese exports rose 6 percent, although that lagged the past decade's 18 percent average yearly growth, according to a government report. (http://bit.ly/2yCr6qW)
For shippers, rising Chinese demand for Australian and Brazilian iron ore translates into much higher revenue.
A voyage from Tubarao port in Eastern Brazil to Qingdao in Eastern China needs three times as many tonne miles as a trip from Qingdao to Dampier in Western Australia would.
There has already been a noticeable impact. Average daily earnings for capesizes hit a fresh three-year high on November 30 after China ordered steel mills in 28 cities to slash production for a few months to reduce emissions of pollutants.
Shippers that largely operate capesizes including Star Bulk Carriers Corp, Safe Bulkers Inc and Scorpio Bulkers Inc are expected to increase revenue between 23 and 33 percent next year, according to Thomson Reuters I/B/E/S.
Capesize rates have benefited from other factors too.
After years of declining demand and a consequent fall in shipbuilding, a scarcity of ships has contributed to higher rates. A recent maritime traffic jam at Chinese and Australian ports has also helped.
Market rates for capesizes are soaring as ship owners with vessels stuck in the gridlock struggle to hire out vessels.
For the first time in more than 15 years, there will be a supply deficit of ships because the current orderbook of capesizes stands at historic lows, Seanergy's Tsantanis said.
"Capacity of the global shipyards is nowhere near to cover the incremental demand requirement in 2018, 19 and 20." (Reporting by John Benny in Bengaluru; Editing by Sayantani Ghosh and Sai Sachin Ravikumar)
• Scorpio Bulkers Inc. • Morgan Stanley • Star Bulk Carriers Corp.