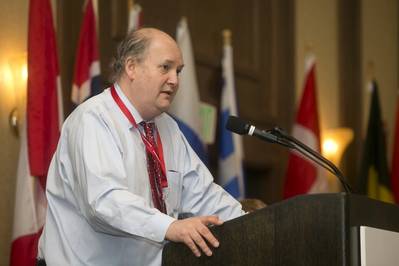 Robert Bugbee, President of Scorpio has been named as the Connecticut Maritime Association (CMA) Commodore for the year 2014. The award will be presented March 19, 2014 at the conclusion of the CMA's Shipping 2014 Annual Conference and Exposition

Mr. Bugbee follows a long succession of influential maritime industry leaders as Commodore. The 2014 Commodore Award will be presented to Mr. Bugbee on March 19, 2014 at the Gala Dinner marking the conclusion of the annual Connecticut Maritime Association conference and trade exposition, at the Hilton Hotel in Stamford, Connecticut, U.S.

The Award is given each year to a person in the international maritime industry who has contributed to the growth and development of the industry.

Mr. Bugbee is a serial success story with more than twenty five years in shipping, teaming with great companies and great partners to contribute to the successful development of multiple businesses, from his start at Gotaas Larsen to the growth and perfectly timed sale of the Craig Stevenson led OMI, where he contributed astute commercial vision as Chief Operating Officer.

Mr. Bugbee brings an enormous understanding of the international shipping markets and the equally important capital markets to bear in his current role as President of Scorpio Tankers Inc. where he has been since 2010, when the company went public. He joined the Scorpio Group in February 2009. With the support of the company's investors and Chairman and CEO, Emanuele Lauro, Scorpio has more than any other public shipping company articulated a view of the future of the tanker industry and created a platform from which they have 18 vessels on the water and have ordered more than 50 modern ECO MR tankers.

But the remarkable growth of the Scorpio brand did not rest there. With market sense and astute timing his Scorpio team identified opportunity in dry bulk and Mr. Bugbee is a Co-Founder of Scorpio Bulkers Inc. and has been its President since July 1, 2013. The company is listed on the Norwegian OTC, focused on the ownership and operation of a fleet of 15 modern mid-size dry bulk carriers. Scorpio Bulkers has filed to list on the NYSE.

The Group and Mr. Bugbee also noted current opportunity in the VLGC gas sector and placed an order for eleven modern gas carriers which they subsequently merged through a structured investment into Connecticut based Dorian LPG, providing scale, value and liquidity through a significant consolidation of the gas sector, to Scorpio investors.

The team at Scorpio is focused on delivering value to clients and shareholders, and in Mr. Bugbee have an articulate, opinionated, dynamic master of communications, skills which have helped deliver value through a combination of strong relationships within the institutional investment markets and an adroit command of capital markets products and timing.

Ian Workman, President of the CMA, upon making the announcement, stated "Mr. Bugbee is the personification of the sort of energy and creative thinking that makes the shipping industry great. A champion of the industry, Mr. Bugbee is a tireless contributor to the business, telling the industry's story, whether at our Association lunches and conferences or on the road speaking to the world about the Scorpio Group. His eyes are always focused on building value for his business, but he always finds time to give back as well. So for all he has done for the industry, and for our community here and around the world, it is a pleasure to recognize Mr. Bugbee as Commodore."