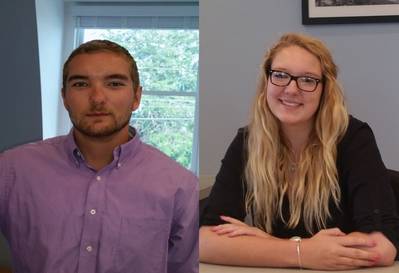 Bristol Harbor Group, Inc. (BHGI) announced the addition of naval architect Zachary Gilfus and mechanical engineer Marissa Stutzman to its naval architecture and marine engineering practice.
Gilfus is the most recent addition to BHGI, joining the team at the end of August as a naval architect and marine engineer. Gilfus graduated this past spring from Webb Institute with a Bachelor’s of Science in naval architecture and marine engineering. During his time at Webb, Gilfus interned at four different companies including Carnival Cruise Lines and General Dynamics NASSCO. He was given the American Bureau of Shipping Stevenson Taylor Award for best thesis. Zach passed the fundamentals of engineering exam in the spring of 2015 and was recently approved as a New York State Engineer in Training.
Stutzman joined BHGI as a mechanical engineer in June. She graduated on the dean’s list in the spring of 2015 from Rensselaer Polytechnic Institute with a Bachelor’s of Science in biomedical engineering and mechanical engineering. During her time at Rensselaer, Stutzman worked on four different engineering projects, captained an NCAA Division III swimming and diving team and was very active in many clubs and societies, including the Society of Women’s Engineers and the Women’s Mentor Program among others.
• American Bureau • Carnival Cruise Lines • General Dynamics NASSCO