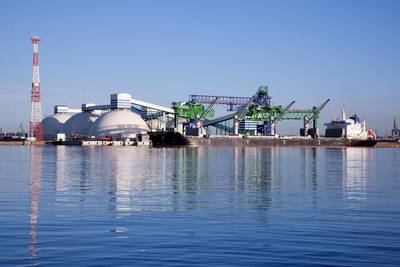 Ports in one of Brazil's biggest farming states are handling an unusual amount of fertilizer after importers rushed to secure supplies amid fears that sanctions on Belarus and Russia would curtail trade, the Parana port authority said.

Brazilian importers are keen to secure crop nutrient supplies even if they have nowhere to store them as Brazil relies on imports for 85% of its fertilizer needs.

Paranagua, one of the South American country's busiest ports, has 18 vessels awaiting to unload nearly 600,000 tonnes of fertilizer products from various origins, the Parana port authority said in a statement.

And the port's entire 3.5 million tonnes of storage is already in use, hindering unloading work, Luiz Garcia, president of Parana Ports, told Reuters in an interview on Tuesday.

Paranagua's fertilizer unloading speed, which hinges on factors such as the importers' commercial strategy, good weather and the availability of storage, has been challenged by a surge in traffic, 12 days of rain in March and finite storage space.

Garcia said a queue of 18 vessels represented an improvement from recent weeks, when as many as 30 ships were waiting to unload fertilizer at Paranagua, a publicly-owned port.

"The situation is more controlled now," Garcia said of Paranagua, which receives cargos from 30 countries, including China, Russia, Canada and Belarus.

A vessel which has been waiting the longest to unload fertilizer there arrived on Feb. 21, the statement said.

Paranagua boasts Brazil's most efficient infrastructure to unload fertilizers, Garcia said, with the port currently capable of unloading an average of about 40,000 tonnes in a day. The storage space around the port area is privately-owned.