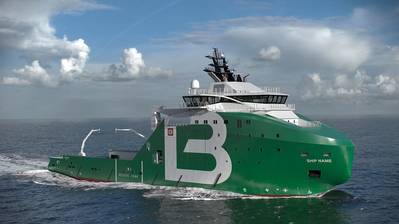 Bourbon 2014 first quarter revenues were €320 million, an increase of 7.9% at constant exchange rates (2.9% at current rates; Bourbon confirms its objective of 8-10% growth in revenues for 2014 with a slight increase in the EBITDAR/revenue margin

“Sequentially, the first quarter saw a contrast in results between different segments, with satisfactory performance in shallow water and weaker performance in deepwater and crewboats. In subsea, activity was supported by a utilization rate of more than 94%,” said Christian Lefèvre, Chief Executive Officer of Bourbon. “Sequential revenues were impacted by seasonal effects while year on year results were impacted by foreign exchange rate movements. The trend in average daily rates is still positive and we anticipate an increase in activity for the rest of 2014.”

Quarterly revenues rose 7.9% (at constant rates) partly due to a 7.1% increase in the size of the fleet, the company said. First quarter activities were impacted sequentially by seasonal effects in the North Sea and in Southeast Asia. The fleet utilization rate excluding crewboats was over 90%, helped by stronger activity in the shallow market in West Africa. Average daily rates stable overall, with a strong increase in Subsea Services (+12.4%) and smaller increases in the deepwater and crewboat segments, partly due to vessel mix and geographic effects. Foreign exchange rate movements continued to have an impact on revenues, partly offsetting the addition of new vessels in some segments and improvements in average daily rates and utilization rates in others.

Consolidated revenues for the first quarter of 2014 were established for the first time according to the new accounting standards IFRS 10, IFRS 11 and IFRS 12 relating to consolidation which became mandatory as of January 1, 2014. Specifically, joint ventures on which Bourbon has joint control are now consolidated using the equity method which replaces the proportionate consolidation method. Comparative figures are restated accordingly.

The financial information is presented by activity and by segment based on the internal reporting system and shows internal segment information used by the principal operating decision maker to manage and measure the performance of Bourbon (IFRS 8). The principles of internal reporting do not reflect the application of the new IFRS 10, IFRS 11 and IFRS 12. Consequently, joint ventures are still proportionately consolidated, as in previous years.

Marine Services indicators by segment
Deepwater offshore vessels - Market conditions overall in the first quarter contributed to higher utilization rates and higher average daily rates compared with the same period last year. Several new contracts and extensions of existing contracts were secured at higher rates as well as the addition of some larger PSV into the segment. The sequential decline in utilization rates compared with the fourth quarter of 2013 was partly due to seasonal effects in the North Sea and to a lesser degree due to a higher number of classification drydocks, which were at a similar level compared with the same period last year. The increases in both average daily rates and utilization rates have been partly offset by the impact of foreign exchange rate movements.

Shallow water offshore vessels - The trend for modern and efficient vessel demand is still present in the Shallow water market. The revenue growth in the first quarter of 2014 compared with the same period last year was largely driven by vessel deliveries and an increase in the utilization rate. Revenues also benefited from reduced classification drydocks in the quarter both sequentially and year on year. Average daily rates declined slightly as newbuild vessels were almost exclusively allocated to the Asia and Mediterranean/Middle East/India regions where daily rates are generally lower than those of other regions such as West Africa.

Crewboats - The reduced utilization rates both year on year and sequentially was partly due to slower growth conditions in a competitive market in West Africa. Average daily rates improved year on year due to the addition of FSIV vessels which earn higher daily rates than other smaller crewboats.

Subsea Services
IMR activity in West Africa has continued to show demand growth, particularly among contractors. During the first quarter, two new vessels (the fourth and fifth vessels in the Bourbon Evolution series) entered the fleet yet had no impact on revenues due to the timing of their availability. In addition, Subsea services continued to align its fleet positioning strategy with the transfer of two smaller subsea services vessels to marine services, which had a negative impact on revenues and a positive impact on average daily rates due to the mix effect.

Other
Using chartered vessels has two advantages for Bourbon: it makes it possible to meet client demands and generate contracts while new vessels are being built and added to the fleet. Using chartered vessels also enables Bourbon to offer vessels that are not part of its regular line of services when needed for global calls for tenders. Volatility of “other” revenues is largely due to the variation in the number of chartered vessels during the period.

Outlook
The demand for offshore vessels continues to grow, helped by a relatively stable oil price during the past several years.

Even though there have been fewer awards to contractors from oil and gas companies, their backlog is still strong and we do not foresee an impact in 2014 on offshore marine and subsea services activities.

Deepwater offshore vessel demand growth is being driven by high return projects. The high number of large PSVs coming out of the shipyards could negatively affect the spot market. This should have only a small impact on Bourbon, taking into account the high contractualization rate of its PSVs.

The demand in the shallow water offshore market remains driven by the renewal of the fleet with modern, safe and efficient vessels, strengthened further by projects using enhanced oil recovery on existing fields and by new jack ups entering into service.

The Bourbon Evolution 800 series is progressively finding its place and is becoming a reference for IMR duties for deep offshore fields, reducing oil and gas field operating costs through high technical availability and low fuel consumption. The first four vessels in this series are currently under contract. The subsea market remains supported by the growth of subsea wellheads to be delivered.

Major Operations and Highlights
In line with the “Transforming for beyond” “Asset Smart” action plan, a total of 21 vessels were transferred to ICBCL during 2013, as part of the sale and bareboat charter agreement for up to 51 vessels signed with ICBCL on April 9, 2013. Thus far in 2014, 15 additional vessels have been transferred (four deepwater vessels, 10 Shallow water vessels, one subsea services vessel) for $464 million. This brings the total vessels transferred under the deal with ICBCL to 36 vessels for a total amount of $986 million.

In the agreement signed in November 2013 with Standard Chartered Bank (SCB) for the sale and bareboat charter of six new build vessels, the ownership of the first three vessels were transferred in 2013 for US$65 million and the remaining three vessels will be delivered to SCB during the second half of 2014.

The company noted that on March 16, 2014, Jaccar Holdings announced its intention to propose a bid for Bourbon shares at a price of €24 (with dividend rights attached) per share. The main elements of this proposed offer can be found in the press release issued by Bourbon on March 17, 2014. On March 17, 2014, the Autorité des marchés financiers (AMF) published a decision indicating that the announcement of the offer marks the start of the pre-offer period during which the provisions relating to tradings (Articles 231-38 to 231-43 of the General Regulation of the AMF) and the reports of transactions (Articles 231-44 to 231-52 the General Regulations of the AMF) are applicable to shares in Bourbon. The draft offer remains subject to review by the AMF.

Additional Information
While there was some hedging activity in the first half of 2013, since the beginning of the third quarter of this year, Bourbon no longer has any hedging in place. At constant exchange rates, first quarter 2014 revenues rose 7.9% compared with the same period last year