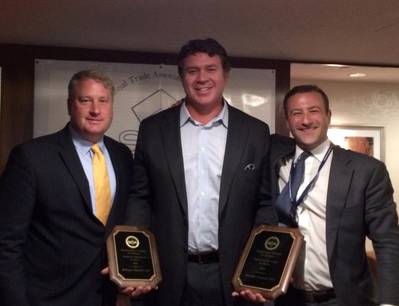 Bollinger Shipyards was presented the 2014 Award for Excellence in Safety for the 10th consecutive year, and was also presented the 2014 Award for Improvement in Safety by the Shipbuilders Council of America (SCA) on April 23, 2015, during the association’s Spring General Membership Meeting in Washington, D.C.
The Award for Excellence in Safety is given to member companies with the lowest total recordable incident rates (TRIR) based on a quarterly injury and illness survey conducted by the association. The Award for Improvement in Safety is presented to member companies with a 10 percent or more reduction of their TRIR from the previous year.
On accepting the awards, Bollinger’s President and CEO Ben Bordelon said, “For the past decade, Bollinger Shipyards and its employees have been committed to be one of the safest shipyards in America. Our company is proud of its accomplishments and looks forward to the future as we continue our mission of exceptional achievements in worker safety. These awards would not be possible without the hard working men and women of Bollinger who have made safety a priority in all of our facilities.”
• Shipbuilders Council of America • America • Ben Bordelon