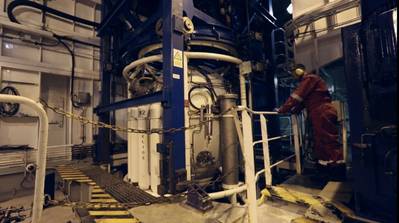 On an evening in September 2012, a rare sequence of events left one of Bibby Offshore’s saturation divers stranded in complete darkness, 90 meters below the surface of the North Sea, without any gas to breathe.

The diver was rescued and recovered fully, but Bibby Offshore wanted to share its experience and the lessons learnt in the most effective way, so in collaboration with floating Harbour Productions, created a documentary style film, Lifeline, using real time footage and reconstruction of the event to recount the remarkable events that took place that evening.

Lifeline demonstrates an example of human reaction to changing and challenging circumstances, and how leadership training, and the right behaviours, procedures and emergency response actions can tip the balance in a life and death scenario.

Due to the combined effects of unique faults in the dynamic positioning system, Diving Support Vessel (DSV) Bibby Topaz was left 190 metres off position. At the time, diver Chris Lemons and his colleague were deployed subsea working in a drilling template. Although both divers got out of the template safely, Chris’s umbilical, which provided him with breathing gas, hot water for his suit and communications, became trapped and subsequently parted, leaving him alone and in complete darkness on the seabed.

After 40 minutes in incredibly harsh and life-threatening conditions, the professional and astute actions of the Bibby Topaz team resulted in Chris being rescued and returned to the bell, unconscious, but alive. He made a full recovery, and the incident provided the unique opportunity to improve and enhance diver safety across the entire industry which Bibby Offshore was absolutely determined to grasp.

Lead QHSE Advisor at Bibby Offshore Chris Cleghorn, who was on-board the vessel on the night of the incident, said: “Whilst technical safety films are hugely valuable tools, Lifeline does not set out to address safety issues from this point of view, rather it focuses on the human response and personal impact.

“In addition to the many lessons to be learned from the incident, its aim is to make us consider the consequences of things going wrong, and Lifeline is a vivid reminder of the preciousness of a human life.”

Bibby Offshore has used Lifeline extensively to engage with the industry, through regular communication with operators, subsea contractors and industry bodies. The lessons learnt from the incident and the initiatives identified, are also continually addressed through the company’s Diving Safety Workgroup (DSW).

Directly after the incident, Sir Michael Bibby and Bibby Offshore’s Chief Executive Howard Woodcock took the decision to form the DSW to take every step possible to identify how the safety of diving operations can be further enhanced and the risk reduced to as low as possible.

The DSW is an output from the incident, and the means by which Bibby Offshore has continued to engage with the industry since the incident. Its scope covers safety in diving operations, technological development in diving equipment, gaining feedback from offshore teams and assisting with the implementation of identified enhancements while monitoring the effectiveness of them.

The workgroup, which includes representation from the Diving and QHSE departments, was set up to identify opportunities for improvement in diving operational practices, equipment, and procedures for use not only by Bibby Offshore, but across the wider oil and gas subsea sector.

The DSW has been instrumental in identifying improvement and enhancement opportunities to ultimately make diving operations safer, and Lifeline has been an invaluable tool in educating and driving engagement as part of the process.

The whole Bibby Offshore team knows the 2012 incident could have ended in tragedy. However now the goal is to learn from the event, enhance technology and systems, and encourage the entire global diving industry to do the same, ultimately positioning Bibby Offshore as leaders in diving safety.