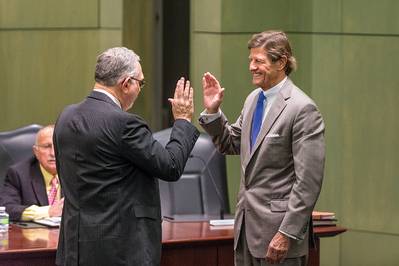 Gov. John Bel Edwards appointed Darryl D. Berger to the Board of Commissioners of the Port of New Orleans. Berger, who was sworn in during today’s monthly Board meeting, will serve a five-year term, succeeding Scott Cooper, one of four Orleans Parish representatives on the seven-member regional Board.

Berger is President of The Berger Company Inc., which he founded in 1972 and is based in New Orleans. An investor, developer and financier of real estate, Berger is particularly active as a leading developer in downtown New Orleans, leading projects such as the Jax Brewery, one of the largest historic redevelopments in the nation, as well as Canal Place, the Windsor Court, Omni Royal Orleans, Loews New Orleans Hotel and Omni Riverfront Hotel.
Throughout his career, Berger’s company has owned or developed in excess of $1 billion of real estate of all types, including more than two dozen retail shopping centers, various hotels, office buildings, multi-family projects and parking facilities.
Berger currently serves as chairman of the New Orleans Tourism and Marketing Corp., as well as a member of the Board of Directors and Executive Committee of the New Orleans Convention and Visitors Bureau.
Berger earned his bachelor’s degree from Vanderbilt University and his law degree from Tulane University. He currently serves as chairman of the Board of Trustees of Tulane University and is a member and former vice chairman of the Board of Trust of Vanderbilt University. He served as the inaugural chairman and founding member of the French Quarter Festival, founding member of the French Quarter Management District and founding member of the Vieux Carre Commission Foundation. He also currently serves as a founding member and current Chair of the Board of the University Medical Center.
The Board of Commissioners of the Port of New Orleans consists of seven commissioners, who are unsalaried and serve five-year staggered terms. The Governor of Louisiana appoints members from a list of three nominees submitted by 19 local business, civic, labor, education and maritime groups. Four members are selected from Orleans Parish, two from Jefferson Parish and one from St. Bernard Parish.
Current members include Chairman Michael W. Kearney, Vice Chairman Robert R. Barkerding, Secretary-Treasurer Laney J. Chouest, Arnold B. Baker, Tara C. Hernandez and William T. Bergeron.
• Board of Commissioners of the Port of New Orleans • Board of Trustees • Jefferson Parish