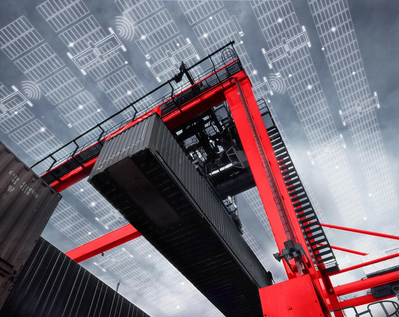 The system will comprise eight automated rubber-tired gantry cranes (AutoRTGs) controlled by the Kalmar Terminal Logistic System (TLS) and new-generation remote control (RC) desks. The order was booked in Cargotec's Q4 2018 order intake, with delivery of the system scheduled to commence at the end of 2019.

Belfast Container Terminal (BCT), the largest in Northern Ireland,  is owned by and located in Belfast Harbor and is operated under concession by Irish Continental Group. Belfast Harbor is Northern Ireland's principal maritime gateway, handling approximately 70% of Northern Ireland's seaborne trade and 20% of the trade for the island of Ireland as a whole. The AutoRTG system will replace the manually operated rail-mounted gantry crane (RMG) system currently in use at the terminal. The cranes will be factory pre-tested and they will be delivered to BCT fully erected.

The cranes at BCT will operate fully automated within the container stack, receiving orders from the Kalmar TLS which performs planning, routing and execution for all operations based on orders from the terminal operating system (TOS). Crane gantry operation will be automated with supervision from the operator at the RC desk in the control room. Truck handling will be remote controlled, and the system will feature a truck positioning system to ensure accurate alignment of trucks under the RTGs. As part of the project scope, Kalmar will be responsible for the integrations between the TLS, the TOS and other relevant systems.