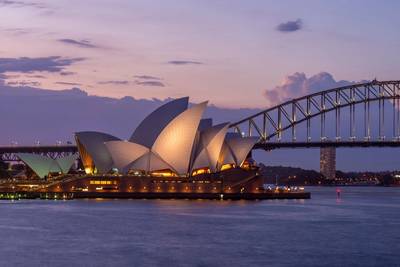 Australia ordered two cruise ships to leave its waters on Thursday, after a liner that docked in Sydney Harbor last week became the primary source of infection in the country's coronavirus outbreak.

Although well below levels elsewhere in the world, the pace of Australia's infections is starting to pick up speed, reaching nearly 2,800 cases and 13 deaths.

The government of West Australia state said nobody would be permitted to disembark from the German-operated MV Artania after seven of 800 foreign passengers on board tested positive for the virus, unless there was a "life threatening emergency".

"This ship needs to leave immediately," Premier Mark McGowan said. "Our position is clear, we are not going to have a Sydney Harbur fiasco on our watch."

Germany's Phoenix Reisen, owner of the Artania, was not immediately available for comment.

McGowan said a second cruise ship, the MSC Magnifica, which was refused permission to dock in Perth this week, was headed out of Australian waters. MSC Cruises, which has said it had no ill passengers, declined to comment on its destination.

Cruise ships have become a flashpoint after 147 of the 2,700 passengers allowed to disembark from Carnival Corp's Ruby Princess later tested positive for the virus, a blunder that underlined official tensions in handling the crisis.

State and federal authorities have clashed over who was at fault, amid conflicting public advice over matters such as virus testing and school closures.

Western Australia is preparing Rottnest island, a former prison island, to quarantine some of the 800 Australians aboard a third cruise ship, the British-operated Vasco de Gama. More than 100 other passengers, from Britain and New Zealand, will be quarantined on the ship when it docks on Monday.

More than 3,000 Australians are scattered on about 30 cruise ships around the world, Foreign Minister Marise Payne said.

"In so many ports - I couldn't begin to count - but literally from South America, to Europe, to the United States, and further afield," she said. "We want to make sure that those Australians are able to return."

Two British tourists found themselves stranded in South Australia last week after getting off the Celebrity Solstice cruise liner in Sydney, and travelling to the city of Adelaide where they were told to quarantine themselves, they told media.

Steve and Tina Dixon, an asthmatic diagnosed with the virus, had to rely on a good Samaritan for food after arriving in the city where they had no friends or family, and were unable to register for a home delivery account at a local supermarket.

Some state leaders have also flagged that they are willing to push for tougher curbs on social activities if Prime Minister Scott Morrison's government does not move fast enough.

Stricter measures likely in the next few days are expected to affect retail and public transport.
Police will patrol beaches on what is set to be a sunny weekend, after crowds at Sydney's Bondi last weekend frustrated officials and set off a round of tighter curbs.

"Because of the lack of consistent messaging, because people had been flouting the earlier advice regarding social distancing measures, we need to move further and quickly to ensure that what we're seeing around the world doesn't mimic and occur on front doors," Australian Medical Association President Tony Bartone told reporters.

With infections rising quickly, Australia has ordered curbs, such as the forced closure of pubs, restaurants and cinemas.
Long queues snaked around welfare offices, while more than a quarter of a million Australians registered for financial help on Wednesday, the government said.

Further job losses are expected, with some economists expecting Australian unemployment to double this year to more than 11%.
Flight Centre on Thursday said a third of its workforce of 20,000 faced temporary or permanent redundancy, while retail tycoon Solomon Lew's Premier Investments Ltd temporarily closed all stores in Australia.