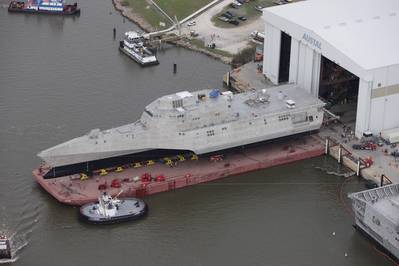 Mobile, Alabama-based Austal USA successfully launched the second 127-meter Independence-Variant Littoral Combat Ship, Coronado (LCS 4). In reference to the success of the Coronado launch, Joe Rella, Austal USA President and Chief Operating Officer, had this to say, “The success of this major milestone in the life of not only this vessel but of the entire Littoral Combat Ship (LCS) program is a testament to Austal’s highly skilled craftsmen and women. Launch occurs when a ship is complete enough to safely be waterborne. At almost 90 percent complete the Coronado will rapidly be approaching sea trials later this year speeding it along its way to completion and final delivery to the Navy.”
The roll-out involved the use of an innovative self-propelled modular transporter system to transfer the ship from the yard’s final assembly bay to a barge and then onto a floating dry dock for launch. A similar system was first used a few months ago, in September 2011, to successfully launch USNS Spearhead (JHSV 1). Austal USA designed a new set of keel stands to support the ship during construction and facilitate the transition from the assembly bay. Austal’s own self-propelled modular transporters (SPMTs) supplemented those of Berard Transportation of New Iberia, LA, to provide a total of 3,800 tons lift capacity, on some 104 axle lines.

The launch of Coronado was conducted in a multi-step process as follows:

1) On Monday, January 9, SPMTs lifted the entire ship, and keel stands almost three feet and moved the LCS onto a moored deck barge adjacent to the assembly bay.
2) Then the deck barge with Coronado onboard was towed a half mile down river to BAE Systems’ Southeast Shipyard, Mobile.
3) Coronado was transferred on the keel stands using the SPMTs to BAE’s floating dry dock.
4) Today, the floating dry dock was submerged and Coronado floated off.
5) Coronado floated clear of the keel stands, and was maneuvered from the drydock.
6) The vessel was then towed back up river to Austal USA’s facility, where it will undergo final outfitting and activation before sea trials and delivery to the Navy.

A major improvement in safety and efficiency, the new roll-out method has shaved hours off the transfer process, and serves as a capstone in Austal’s effort to reduce cost and time required in future LCS deliveries.  The 127-meter Austal trimaran seaframe is the platform for the LCS mission and weapon systems. This seaframe provides superior seakeeping and aviation as a result of its long, slender central hull and smaller side hulls (“amahs”). The trimaran hullform provides a large internal mission deck with a high payload carrying capacity. Located above the mission bay is the  flight deck capable of conducting  H-60 helicopter operations. The vertical location of the flight deck on the trimaran hull form provides the highest flight deck elevation above the water on a combatant ship other than large deck amphibious warfare vessels or aircraft carriers.

The christening of Coronado is scheduled for January 14, 2012.  The launch of Coronado (LCS 4) closely follows the christening of the 103-meter USNS Spearhead (JHSV 1) and the celebration of the keel laying ceremony for Choctaw County (JHSV 2). Modular construction has also begun on JHSV 3 and Jackson (LCS 6) – the first of the 10-ship Navy contract awarded to Austal, as the prime contractor, a year ago - in Austal’s 700,000-sf Module Manufacturing Facility (MMF). Austal also has Montgomery (LCS 8) and JHSV 3 through JHSV 7 under contract.

For the LCS and JHSV programs, Austal is working in a partnership with General Dynamics Advanced Information Systems, a business unit of General Dynamics. As the ship systems integrator, General Dynamics is responsible for the design, integration and testing of the ship’s electronic systems including the combat system, networks, and seaframe control. General Dynamics’ proven open architecture approach provides affordable capabilities to the fleet quickly and efficiently.  Austal USA employs over 2,100 highly qualified shipbuilders, engineers and support staff and is steadily growing towards 4,000 employees. Information on employment opportunities at Austal USA can be found at www.austaljobs.com.