The Valencia Containerized Freight Index (VCFI) of December experienced a growth of 4.19% with respect to the previous month, confirming the trend of the last five months of the year of increased freight rates. The high demand for traffic with China and the rise in fuel prices have played a major role in this increase.

Thus, the VCFI as a thermometer of the evolution of maritime transport prices is demonstrating the recovery of economic activity. Thus, freight rates end 2020 with a new all-time high of 1,423.2 points, an increase of 42.33% compared to the start of the series in 2018.

This situation is due to the high demand for containers in recent months at a global level, according to the latest RWI/ISL data produced by the Leibniz Institute for Economic Research. Moreover, this rise in freight rates is particularly marked by the great dynamism in some markets and trade routes that has triggered demand, which led some shipping operators not to accept bookings with China (Alphaliner) at the beginning of this month.
Thus, due to the boost in demand there has been a sharp reduction in the levels of idle fleet over the last few months. In this respect, the world fleet of inactive container ships stood at 158 ships in December, with a total of 655 984 TEUs, representing 2.8% of all active vessels.

In addition, other factors directly related to the operating costs of shipping companies have also shown an upward trend in the month of December. On the one hand, the average price of the European Brent barrel rose by 15.93% with respect to November, from $42.60 to $49.49 in December. On the other hand, the bunkering prices of IFO380 (Intermediate Fuel Oil) and VLSFO (Very Low Sulphur Fuel Oil) also rose in the last month of the year.

About the performance of freight rates by area in December, it should be noted that they grew in 10 of the 13 areas analyzed in the VCFI. Only East Coast Africa (-0.35%), Central America and the Caribbean (-0.63%) and Latin America and the Pacific (-2.26%) experienced a contraction in their levels. In the rest of the areas, the dynamism of the markets located along the trade route between the Mediterranean and Asia such as the Far East (+15.18%), the Middle East (+12.06%) and the Indian subcontinent (+13.58%) stand out. It is also worth noting the increase in export freight from Valenciaport to Latin America and the Atlantic (+10.81%). 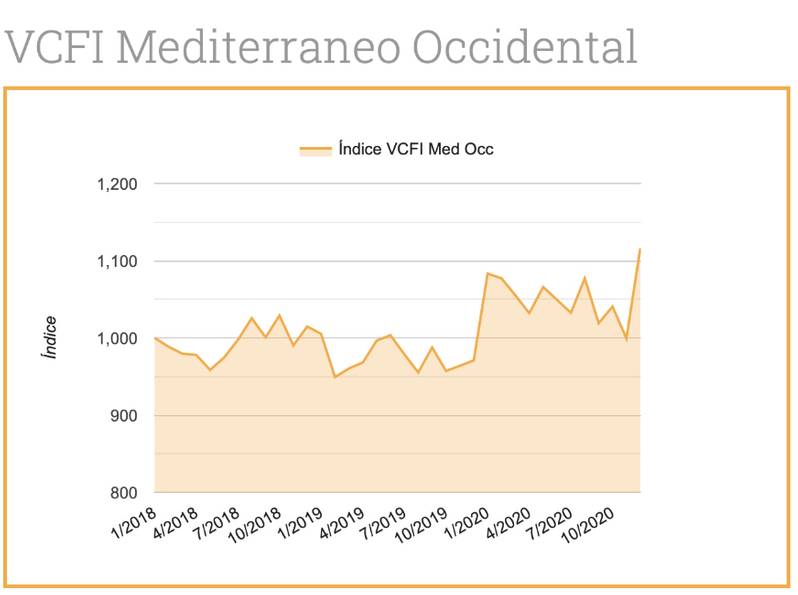 Western Mediterranean
About the Western Mediterranean sub-index, December saw a further change in the series, returning to strong growth of +11.68% and once again showing the volatility of freight rates in the countries of this market. Thus, the year began with a strong increase of 11.57%, due to the cost associated with the entry into force of the new IMO 2020 regulations. However, after this initial growth, prices fell in the following months and there was very little stability in the second half of the year, with continuous changes in the trend.
In addition, Valenciaport's traffic with Morocco continues to be at much higher levels than last year for the same period, even though in November (the latest data available) it suffered a slight decline. For its part, Algeria's export traffic from Valenciaport is very similar to that of 2019, with a slight increase in November.

Far East
As for the Far East sub-index, in December it experienced the highest growth in the last eight months with a rate of +15.18 %. It now has five consecutive months of rising freight levels and stands at 2,763.37 points, reaching a new all-time high since the series began in 2018. On this occasion, as already mentioned, the high demand for traffic with China is translating into strong growth in freight rates worldwide. This situation also occurs in Valenciaport, where export traffic to China increased in the month of November well above its behaviour in the same month of the previous year. 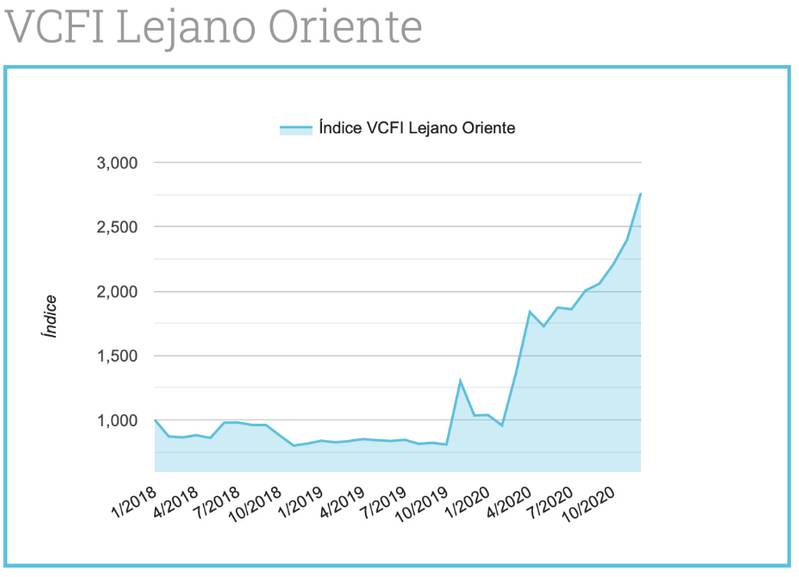