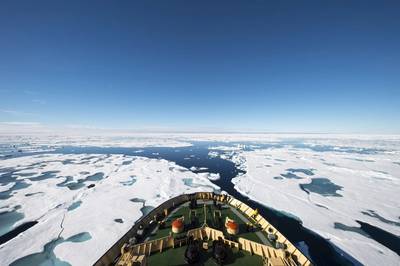 In the last five years, cargo traffic along the NSR has grown almost fivefold, reaching 33 million tons in 2020. Last year, there were 64 voyages on the NSR compared with 37 in 2019. Overall, shipping activity in the Arctic has grown 25% in the six year period 2013 to 2019, while the distance sailed by vessels in the region increased by 75%, according to the Arctic Shipping Status Report #1. In 2019, 977 vessels entered the IMO Arctic Polar Code area. Bulk carrier activity, in particular, has increased significantly (the distance sailed increased by 160% during the six‑year period) with the increase in iron ore extraction in Canada. In future, Russian officials have predicted that cargo traffic along the NSR could increase to 100mn tons by 2030.

The increase in Arctic shipping is made possible by the year-on-year reduction in sea ice. Data from the US National Snow and Ice Data Center shows the average Arctic sea ice extent decreased to 4.3 million sq km in 2019 from 6.1 million sq km 10 years earlier.

The grounding of the container ship Ever Given and blocking of the Suez Canal has also added to the case for shippers using the NSR, which can shave 4,000 nautical miles off traditional Asia to Europe shipping routes. However, climate-change concerns may also hamper development. A growing number of companies, including major manufacturers and shipping companies, have pledged not to ship goods through the Arctic Ocean on the grounds of the potential environmental impact.

In a bid to ensure Arctic shipping develops safely and environmentally, a mandatory code for ships operating in polar waters (the Polar Code) entered force in January 2017. It sets standards for vessel design, construction, equipment, operational, training, search and rescue, and environmental protection activities for ships operating in Polar waters.

Sailing in Arctic waters poses a number of risks, including unpredictable and extreme weather conditions, long periods of darkness, and the remoteness of the shipping routes from infrastructure and emergency response services. In the event of an accident, such as groundings or  fires, the cost of salvage and environmental impact could be considerably higher than in non-Arctic waters. In addition, there is currently a lack of good data on Arctic shipping, in particular detailed navigational charts and hydrography.

The industry will need to find new ways to manage Arctic risks. In my career, there has never been a new shipping route, so the challenges are mind-boggling. We need to actively collect voyage data and change the mind set of seafarers. Polar shipping requires a much more proactive approach to risk management. The industry needs a new framework for data and technology. It is not sufficient to simply wait to study casualties if this is to become a viable and safe shipping route.  The most critical component is training. It is time to rethink our training models so that we train to success rather than away from failure as we have done in the past.

For generations we have based our training curriculums around the study of serious marine incidents, the adage is that maritime regulations are written in blood. There were numerous reasons for this, but two key components where cost and time. In the past, it took significant time and resources to collect voyage data, analyze that data and attempt to identify the root causes of a casualty. As a result, we have always taught away from casualties – the “Don’t do this” approach. The modern merchant vessel is gathering tremendous volumes of data, but we are far from effectively or efficiently utilizing this data. A new training model is needed, that is focused on reaching a successful conclusion, not avoiding casualty – the “Do this” approach.

Polar Shipping provides an ideal scenario for this teaching model. With the lack of bathymetric data available, it is imperative that we study successful voyages and utilize data collected to plan the next voyages. It is also imperative we update the Polar Code quickly and efficiently -- think updating on a quarterly versus a quadrennial basis.  This is true for both the hardware and software. i.e. vessel machinery as well as crews. The harsh polar environment will punish both man and machine, and we must study engine logs as closely as study bridge recorder data of choke point transits.

This type of training and design review approach has the potential benefit for not just ocean going polar shipping but any new route or change in operations that a company may face, including offshore wind development and maintenance. Find what works and refine it. This is not a new concept in the maritime field, but it is one that the industry needs to adopt more consistently to improve long-term safety and efficiency.