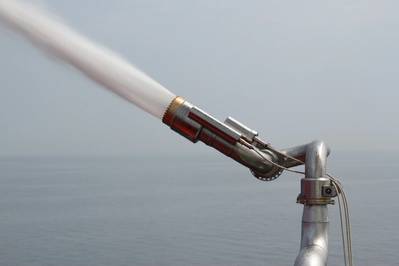 Unifire AB of Sweden (PirateSafe.com) has released an exclusive new video of their Force 80™ Anti-Pirate Water Cannon System on their YouTube channel.

The video shows Unifire's "Force 80" remote control water cannons (a.k.a. "monitors") in action on a large chemical tanker. These impressive water cannons are high-tech and made of acid-proof, marine grade Stainless Steel 316L.

Unifire’s Anti-Pirate Water Cannon Systems are extremely powerful, yet non-lethal, devices for getting tough with pirates and hijackers. The systems are comprised of up to 8 powerful water cannons, which are strategically placed around the ship. The cannons draw sea water from the ship’s existing fire main. The cannons can be networked together for simple control from the bridge.

According to Unifire AB's Managing Director, Mattias Eggert, "We have seen a substantial increase in sales of our anti-pirate water cannon systems in 2011, and particularly during recent months. In our view, ship owners and operators are finally beginning to take significant and serious action to properly protect their ships, including by outfitting their ships with effective self-defense equipment, such as our SeaSerpent™ and our Force 50 and Force 80 anti-pirate water cannon systems. As industry leaders are now outfitting their ships, we expect many others to follow in the coming months and years."

The Force 80 water cannon sprays up to 5000 liters (1,350 US Gallons) per minute at pressures of up to 10 bars (145 PSI). Unifire says their cannons remotely control the high-pressure water stream from the safety of the bridge or citadel, directly onto pirates and into their skiff. Moreover, they can be controlled in semiautomatic mode by deploying in prerecorded spray patterns, and can even be combined with other tracking systems for fully automatic protection.

Since these systems are non-lethal, they avoids the numerous pitfalls and complications associated with equipping ships with armed guards, while still providing ships a powerful weapon with which to defend themselves. Moreover, these cannons are also highly effective in suppressing fires, adding further to the overall safety of a ship.

IMF: Global Impact of COVID-19 will be Severe, but Temporary