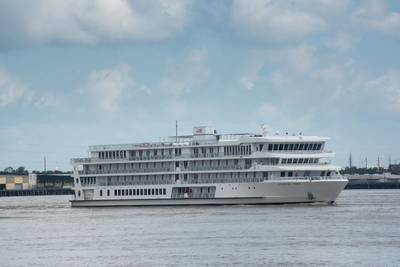 The first contemporary riverboat in the U.S. is set to depart from the Port of New Orleans on October 6 for its inaugural cruise on the Mississippi River.

The new vessel, American Song, is the flagship in a series of contemporary riverboats by operator American Cruise Lines. With an exclusive capacity of 184 guests, American Song provides modern design features and contemporary styling. The modern riverboat features a four-story glass-enclosed atrium with a large domed skylight, which will serve as the central gathering point for the entire ship. American Song will also feature lounges soaring 40 feet above the water with triple the glass of other riverboats, offering astounding views.

For its inaugural season, American Song will cruise a full schedule of eight-day Lower Mississippi River cruises throughout the remainder of 2018.

“It is only fitting to see the first modern riverboat in U.S. history debut on the Mississippi – the nation’s most storied and iconic river,” Charles A. Robertson, CEO of American Cruise Lines.

In 2019, when American Song will repositions out west to the Columbia & Snake Rivers, its sister ship, American Harmony, the second modern riverboat in the series, will take over on the Mississippi River, joining two of American Cruise Line’s Victorian-style paddlewheelers, Queen of the Mississippi and America.

“Inland river cruising is a quickly growing segment of our cruise portfolio. We appreciate our partnership with American Cruise Lines and are working together to provide an exceptional experience for river cruise customers,” said Brandy D. Christian, Port of New Orleans President and CEO. “The history and charm of our vibrant city combined with the modern appeal of the American Song makes sailing from New Orleans on the Mississippi River truly unique.”

The arrival of American Song is the latest in a series of milestones achieved by Port NOLA’s cruise sector that offers passengers both riverine and oceangoing itineraries, as the port anticipates setting a new cruise record in 2018 after handling 1,150,172 passenger movements in 2017, which would mark the fifth consecutive year of more than one million cruise passenger movements.

On the oceangoing side of Port NOLA's cruise business, Disney Cruise Line recently announced it will sail from New Orleans in early 2020 with the Disney Wonder, a 2,700-passenger ship, embarking on a variety of Caribbean and Bahamian cruises – marking the first time Disney Cruise Line will have a homeport in Louisiana. The Disney Wonder is scheduled for six cruises during a limited-time season from New Orleans, February 7 through March 6.

Royal Caribbean International will return to New Orleans in December 2018 to homeport the Vision of the Seas, a 2,050-passenger ship.

Carnival Cruise Line will increase capacity on its short cruise program in 2019 by replacing the Carnival Triumph with the Carnival Valor, a 2,974-passenger ship. Carnival will offer guests a new cruise experience in 2019 when the Carnival Glory takes over the seven-day itinerary of the Carnival Dream.