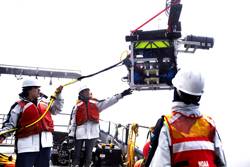 Sony and Intel’s Project Shiphunt team of young explorers, scientists and historians has returned to shore with news of its underwater discovery: shipwrecks of the schooner M.F. Merrick and the steel freighter Etruria, in deep water off of Presque Isle in Lake Huron. The project was completed with “much thanks to pings, processing and 3D,” according to one marine archaeologist. Current Media, the Peabody-and Emmy Award-winning independent television and online network founded in 2005, will air their adventure as the hour-long special, “Project Shiphunt,” on August 30th at 10 p.m. ET.

“Ship hunting was once a long, arduous process – more of a hobby than a science,” explained expedition leader Dr. James Delgado of the National Oceanic and Atmospheric Administration. “With today’s compact, powerful technology, we have the ability to collect data by pinging the ocean floor, processing the data set, and creating a three-dimensional image. Watching that, I was excited to see how the students, like the technology, are up to the task of being the next generation of explorers, oceanographers and maritime archaeologists.”

Project Shiphunt, developed by Sony and Intel Corp., began in May when five ambitious high school students from Arthur Hill High School in Saginaw, Mich., embarked on the adventure of a lifetime in the Thunder Bay National Marine Sanctuary*. Their mission: to hunt for a historically meaningful sunken ship, investigate its identity, and document the journey in 3D video for future generations.  Sony and Intel outfitted these students with the latest Sony VAIO computers powered by 2nd gen Intel® Core™ processors. The student team worked side by side with scientists and historians from the National Oceanic and Atmospheric Administration (NOAA)*, Woods Hole Oceanographic Institute* and NOAA’s Great Lakes Environmental Research Laboratory*.

“The technology used in ship hunting is akin to using your eyes,” said Dr. Delgado, Maritime Heritage Program director for NOAA’s Office of National Marine Sanctuaries. “How much of what you see is dependent on your field of view. Historically, ship hunting was like looking through a microscope. Your perspective was limited to what you could physically see. However, today's technology and advances in computing and SONAR allow us to step away from the microscope, widening our field of view while also preserving the detail.”

The schooner M.F. Merrick was lost when a passing steamer struck her in a dense fog off Presque Isle in May 1889. Laden with a heavy cargo of iron ore, the 230-foot Rufus P. Ranney hit the M.F. Merrick on her starboard (right) side and opened a hole 12 feet wide in the old schooner, causing her to sink immediately. Five crewmen went down with her.
The M.F. Merrick was built in 1863 in Clayton, N.Y., by well-known shipbuilder John Oades. At 139 x 26 feet, she was a typical “canaller,” designed to pass through the locks of the Welland Ship Canal, bypassing Niagara Falls and connecting Lake Ontario and the St. Lawrence River with the Upper Great Lakes.

On February 8, 1902, the Etruria was launched at West Bay City, Mich., by West Bay City Ship Building Co. She was built for the Hawgood Transit Company of Cleveland, but only lasted three years. She sank in 1905, after colliding with a steamer in the fog off Presque Isle Light, in Lake Huron.

Now that the mission of Project Shiphunt is complete, Sony and Intel Corp. will partner with NOAA to offer a comprehensive educational curriculum for high school science and history teachers. Students will be able to experience Thunder Bay National Marine Sanctuary through the Project Shiphunt adventure directly from their classrooms.

The search took place in the Thunder Bay National Marine Sanctuary, located in the waters off Alpena, Mich. The sanctuary protects one of the nation’s most significant collections of shipwrecks, dating back to the late 1800s when the Great Lakes were an engine driving America’s early economy. Hundreds of ships used those waterways and, unfortunately, a number of them never made it across to deliver their cargo.

“Project Shiphunt was an extraordinary opportunity to bring the excitement and science of shipwreck exploration to students and classrooms across the nation,” said Jeff Gray, sanctuary superintendent. “We look forward to continuing our work with Sony to enrich the lives of young people so they will understand and appreciate the value in protecting our nation’s underwater treasures.”